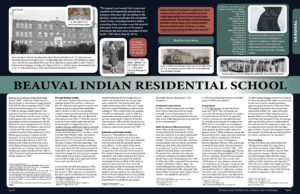 Beauval (Lac La Plonge) Indian Residential School (1860 – 1995) was initially located in Île-à-la-Crosse, in what became Treaty 10 land. It became an official boarding school in 1897 with government funding for 12 children. In 1906, the Roman Catholic Mission that operated the school, moved the site at Lac la Plonge. The Mission ran the school until the federal government took control in 1969. The government worked in cooperation with the Board of Directors (comprised of the Chiefs of the Indian Bands in the Meadow Lake District) until the mid-70s, when the government transferred control of the residences to a First Nations parent group in response to their proposals. The school land became part of the La Plonge Indian Reserve in 1979. The Meadow Lake Tribal Council ran the school as the Beauval Indian Education Centre (an amalgamation of La Plonge High School and the Beauval Student Residence) from 1985 to 1995. The school buildings were demolished by former students in 1995. Click the image above to read more… 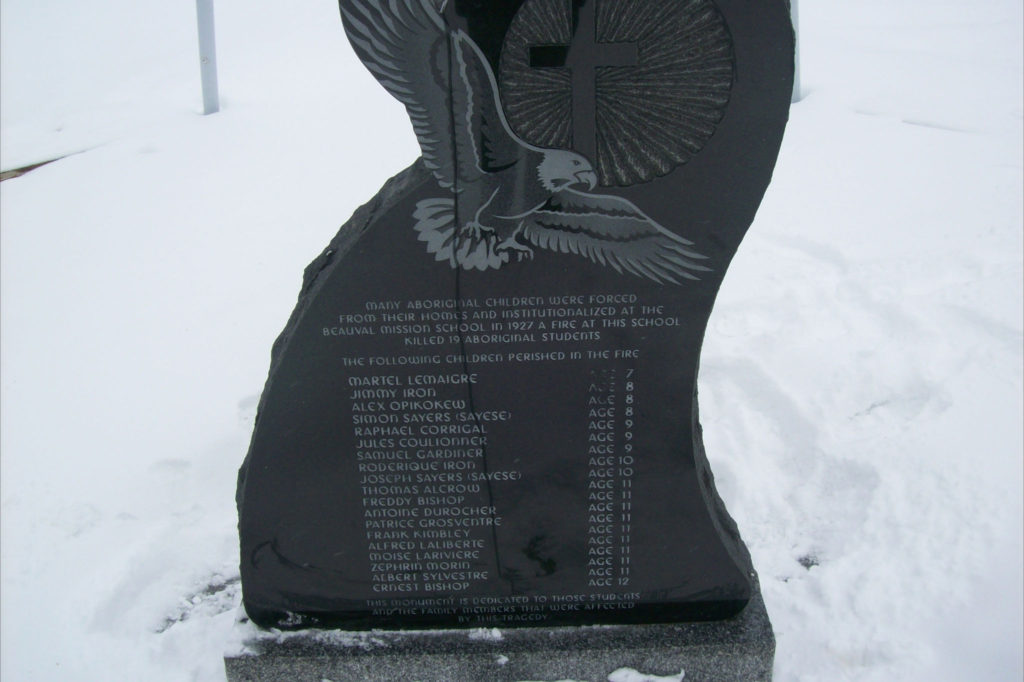 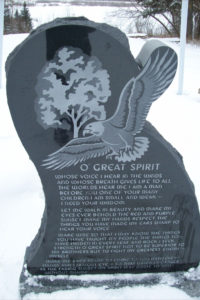 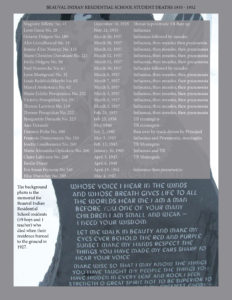 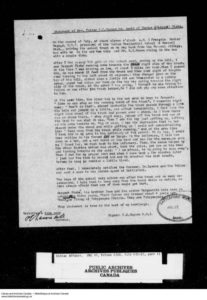 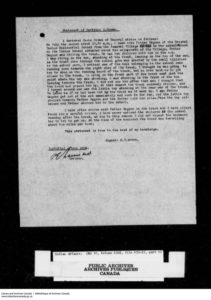 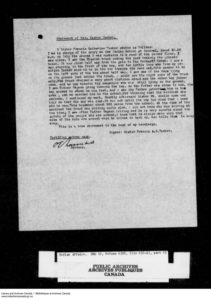 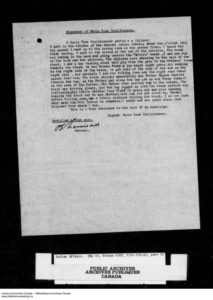 Mervin Mirasty said that at the Beauval, Saskatchewan, school, boys who were caught throwing snowballs were punished with blows to their hands from the blade of a hockey stick. “There was about thirty of us. Every one of us got ten smacks. Every one of us cried except one, one guy, and he refused to cry, but it hurt so much. at was for playing with the snowballs, being a kid, just playing around.”493 (The Survivors Speak: A Report of the Truth and Reconciliation Commission of Canada p. 142)

Mervin Mirasty told the Commission that both he and his brother were sexually abused at Beauval residential school: “To this day, I’ve always wanted to go back and burn the place, and I never did.” He also recalled that, “I ran away from school. I’d go out, I’d walk around town, and steal whatever I could steal … I started stealing cars, I got caught, at 15 I ended up in jail. From, from that point of 15 years old ’til I was, the year 2000, I got sentenced to 25 years all together … and I don’t know what I was fighting, what I was trying to do.”2 (Vol 5, p. 192)

Mervin Mirasty was told to take a lunch pail to a priest’s room. He had not been warned that boys who were sent on such errands were likely to be abused, as Mirasty was in this instance. When he returned, he felt that boys who knew what had happened to him were mocking him. “The boys looked at me, and some of the older ones, they were all smiling.” He warned his own brother to never take the lunch pail to the priest. “And to this day, I don’t know why he didn’t listen to me, like, he, he went up there I guess the next day, or soon after, he come back crying.”558 (The Survivors Speak: A Report of the Truth and Reconciliation Commission of Canada p. 156)

On his first night at the Beauval, Saskatchewan, school, Albert Fiddler, who had never lived in a building with indoor plumbing before, wet his bed. As he recalled, in the morning, a priest threw me in over my knees in front of the kids there, screamed, “you wet your bed” or something. I understand a little bit here and there what they were saying, anyway, because I had heard a little English before here and there. He grabbed my little underwear open, which I had to wear I guess. Slapped my buttocks like crazy there so that I’d never do that again. No explanation, not even asking who I am, and who I, what the hell, and then he gave me in front of the whole, the kids to see me there being bare ass, and I don’t forget that.179 At the Beauval, Saskatchewan, school, Albert Fiddler recalled, Aboriginal languages were restricted to use in religious classes. But that’s the only thing they allow is learning how to pray in Cree. They won’t allow us to talk to each other, and they make sure that we don’t, we don’t talk to each other in Cree either. We only, they only teach us how to pray in Cree in catechisms in the classroom, but not to talk to each other because it’s un-polite for somebody that doesn’t understand Cree.158 (The Survivors Speak: A Report of the Truth and Reconciliation Commission of Canada, p. 54)

An older boy was assigned by the school to help Albert Fiddler adapt to the school. However, the boy soon insisted that Albert give him his dessert at dinner. “So, I had to go out there, and sneak, and give him my, my sweet stuff, yeah, that’s how I was paying him for that. That’s how they were, they were doing that I guess. They had this little racket going on that they were, they get all the dessert from the small boys, or otherwise they will, like, it was more of a, they’re gonna protect us, or whatever.” In this case, bullying became increasingly sinister: eventually, the bully began to sexually abuse Fiddler.641 Fiddler was one of many students who were sexually abused by fellow students. Many more students reported such abuse in their statements.642 e assaults ranged from being forced to kiss someone, to being forced to simulate a sex act, to being raped. While, in some cases, victims were given small treats to encourage them to be silent, in other cases, they were told they would be killed if they reported the assault.643 (The Survivors Speak: A Report of the Truth and Reconciliation Commission of Canada, pp. 186-187)

One of Albert Fiddler’s few positive memories of the Beauval, Saskatchewan, school revolved around sports. “I was a good athlete, I was a good hockey player, I was a good runner, I was a good jumper, so that I guess I started getting patted on the back. I started getting a little, a little bit of recognition as a, an athlete, so because I could outrun anybody, out-jump anybody. I was good ballplayer, so.” When Fiddler got into trouble at school, the priest who coached the school team spoke up on his behalf. “He didn’t want to lose his hockey player, he didn’t want to lose his runner, because we get, we’ll lose points if we want to compete.” Fiddler said the boys would often use department-store catalogues for shin pads, but a new principal had a greater interest in sports. (The Survivors Speak: A Report of the Truth and Reconciliation Commission of Canada, p. 205)

Raphael Victor Paul spent 10 years at the Beauval, Saskatchewan, school. “I thought for a long time that I was better than my parents. That’s the thought that they gave you, because my parents didn’t talk English, but I did. My parents were very Catholic, and I was very Catholic, but I knew both languages, the catechism and all that. So, you get, I got the feeling that maybe I know more than my parents.”

His father believed that the residential school education had prevented his son and his friends from learning the skills they need to survive.

He said, “You know you guys that went to residential school are useless, because you don’t know how to survive like they did.” ’Cause they never taught us that, you know, how to. At that time, there was no welfare, there was, there was no running waters or lights, so we had to do all those things by ourselves, but we didn’t know how. So, the people that went back had to relearn how to survive. And at that time, survival was fishing, hunting, and trapping. To this day, I don’t know how to hunt. I can trap, I can fish, but I don’t know how to hunt, ’cause I, I was never taught that.380 (The Survivors Speak: A Report of the Truth and Reconciliation Commission of Canada, p. 107) 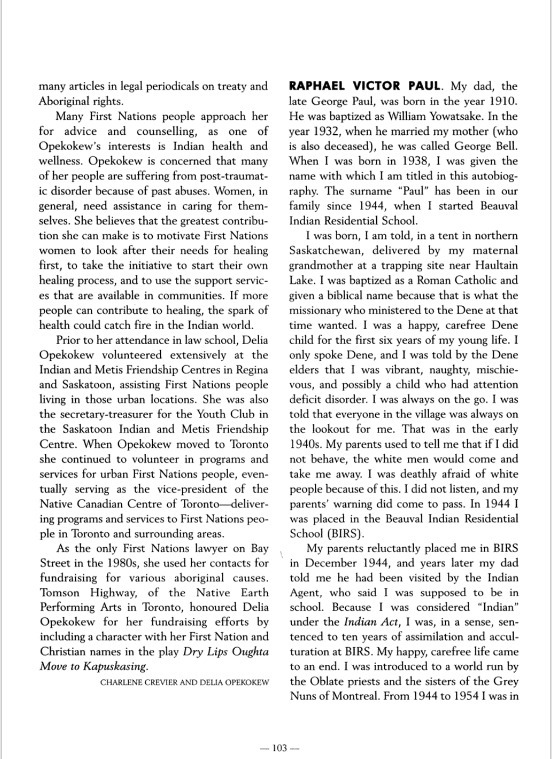 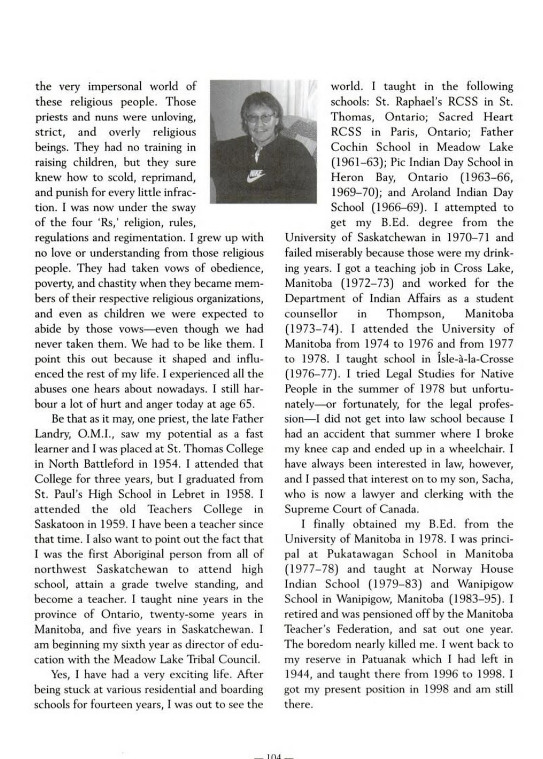 From Saskatchewan First Nations: Lives Past and Present 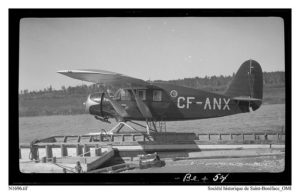 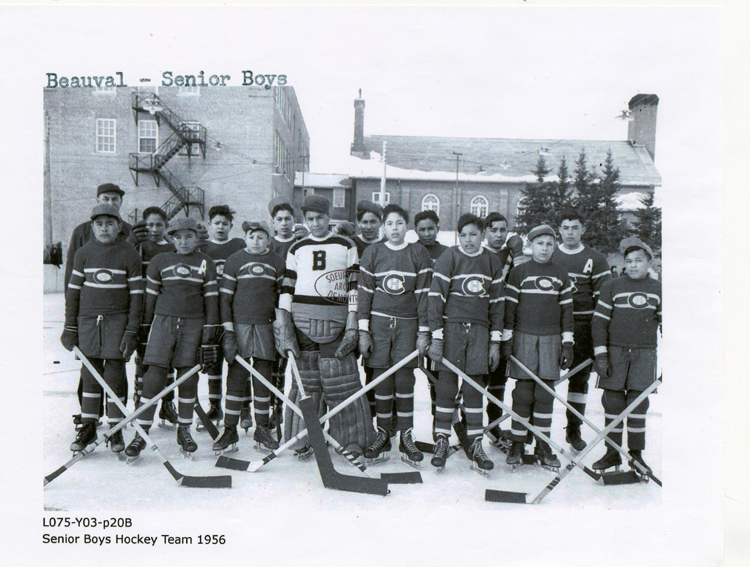 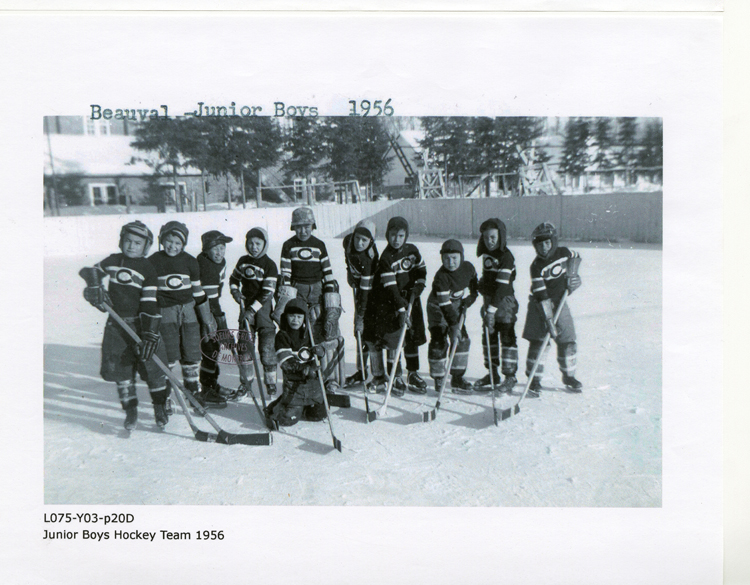 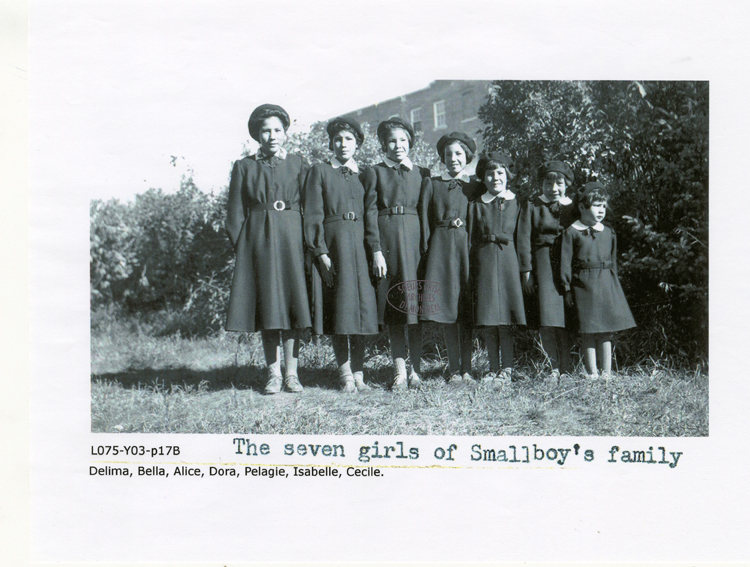 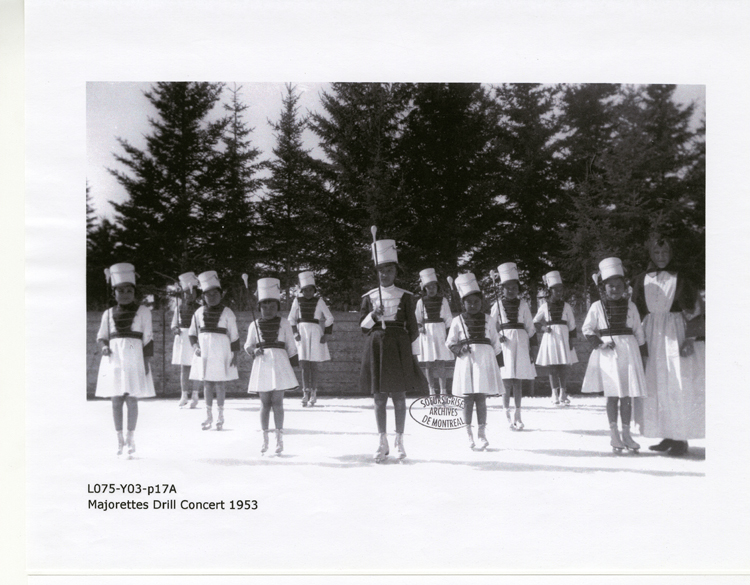 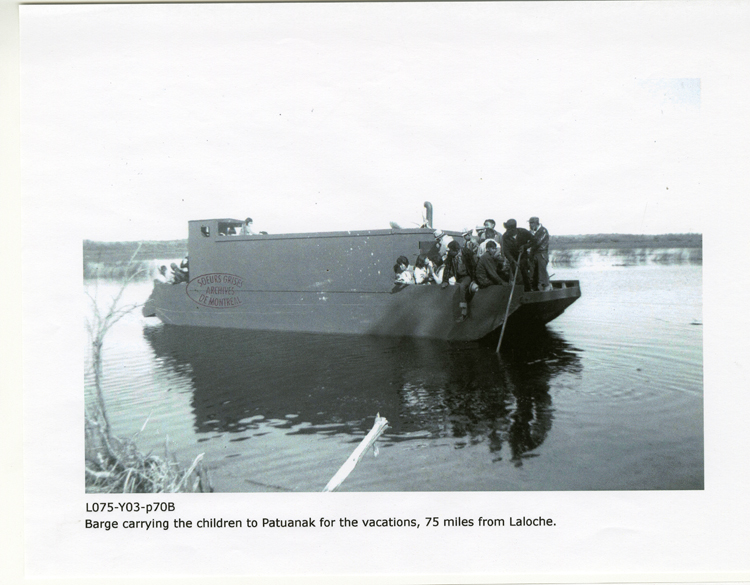 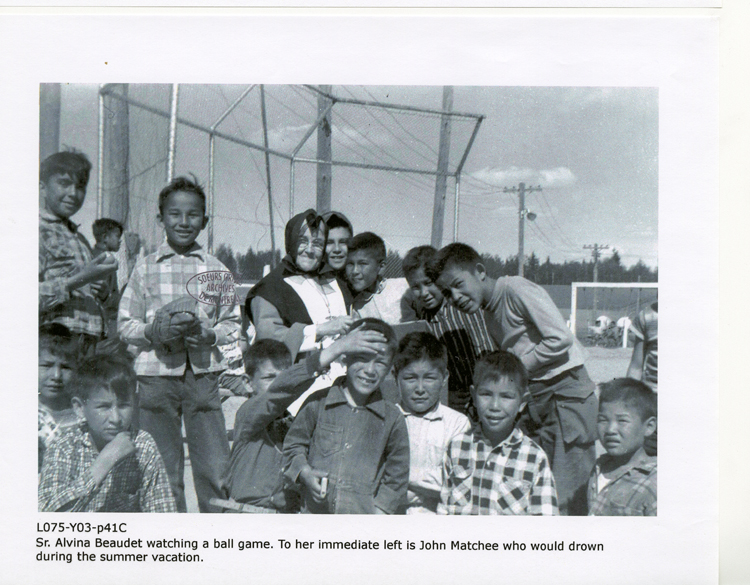 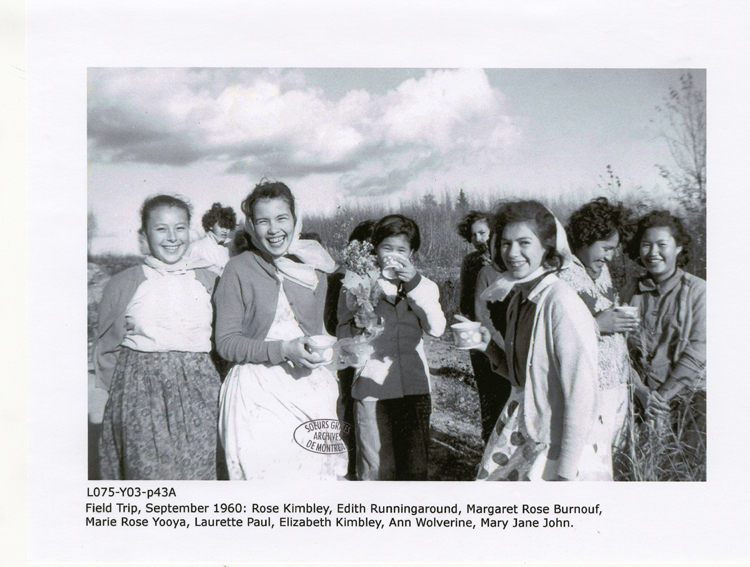 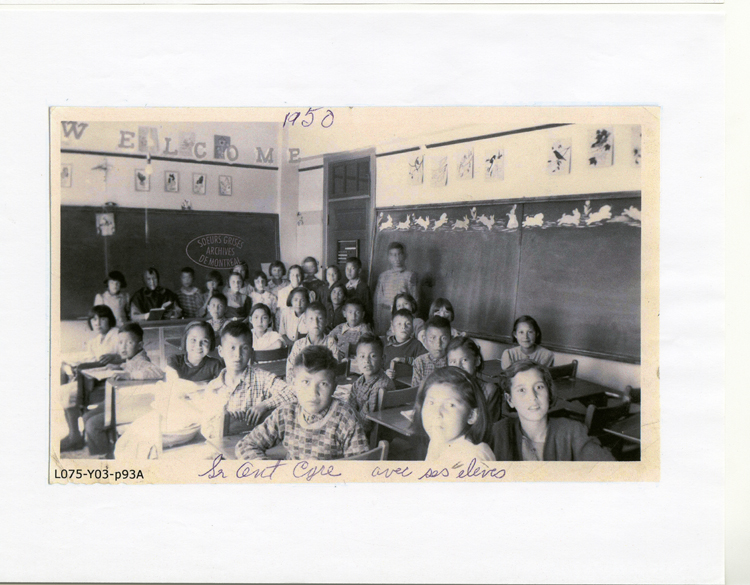 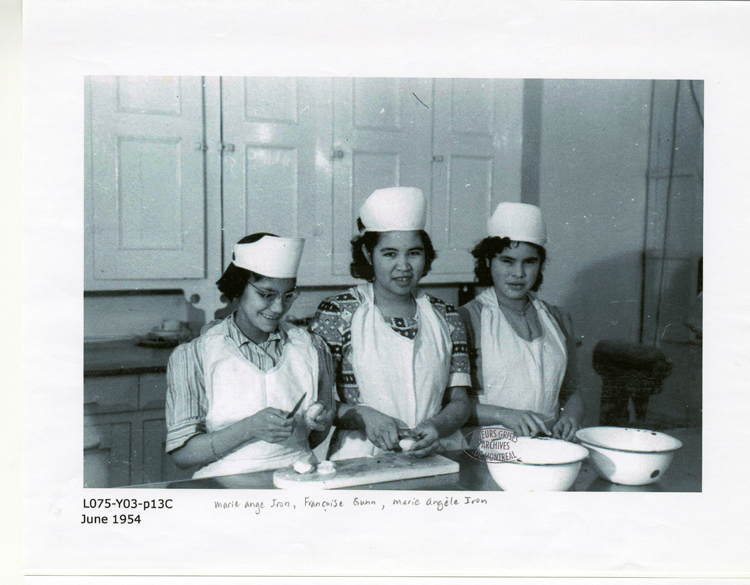 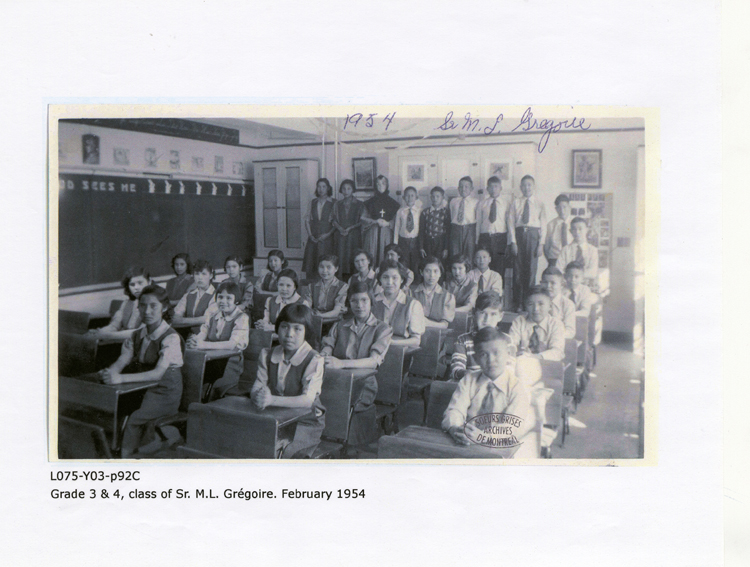 The above photos (L075-…) are from the Algomau Archives. Source: http://archives.algomau.ca/main/taxonomy/term/1284 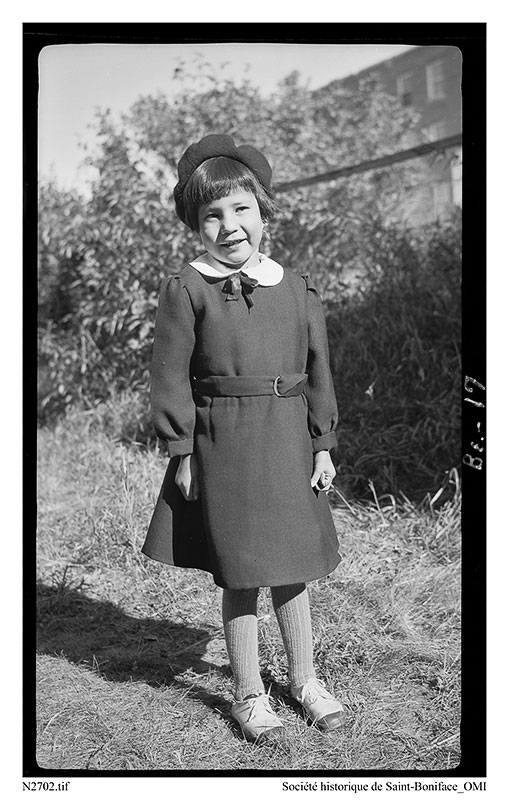 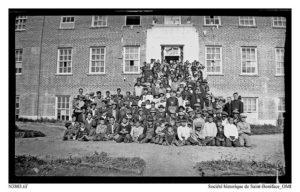 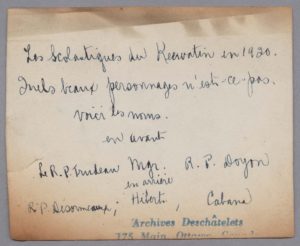 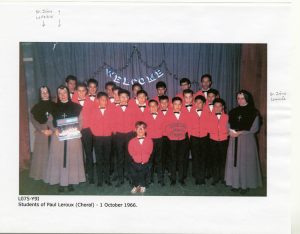 In 2011, the Oblate publication Info Lacombe published a two-page profile on Dufault that mentioned the years he spent in Dillon and Beauval, emphasizing the personal sacrifices he had made in his career. No mention was made of his convictions. (The History, Part 2, 1939 to 2000, Vol. 1, p. 449)