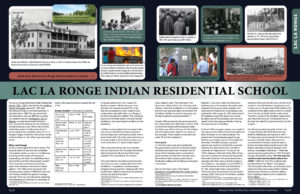 “The present location of the town site of La Ronge owes its situation to Archdeacon Mackay, who in planning for the building of the first La Ronge school bought a saw mill with a government grant and set it up on [37/38] the present town site of La Ronge, which was at that time some distance from the reservation. Here with access to lumber and employment the Indians gradually moved from the reservation to the site of the school that was being built.” Source: http://anglicanhistory.org/canada/sk/machray_stanley1872.html

Muriel Ross shares her experiences of her childhood in the bush and at the residential school. (University of Regina archive)

“I remember the time when I was in school, they used to use horses to freight the stuff to La Ronge by horses, by horse teams. The one that used to freight for the school was Willy Bear was the name of the guy that was looking after the school, bringing in the stuff for the school like flour and beans and salt pork and the tea. And they used to come in once a year in December when the ice was strong. But I remember one winter it didn’t freeze soon and we were running out of food at the school. So the principal, Mr. Fisher was the principal at time, he bought some rabbit snares for the boys and these boys would go in the bush. In the mornings they would snare rabbits and then they would bring them to the school and the girls in the kitchen would clean them up, take the fur off and cut them up and put them away because we were told that this was our Christmas dinner saying that they couldn’t bring anything at Christmas. And they also caught ptarmigan and we had these. We were glad to have these because this is what we had at home and we had rabbit stew I think for Christmas at that time.” Janet Fietz 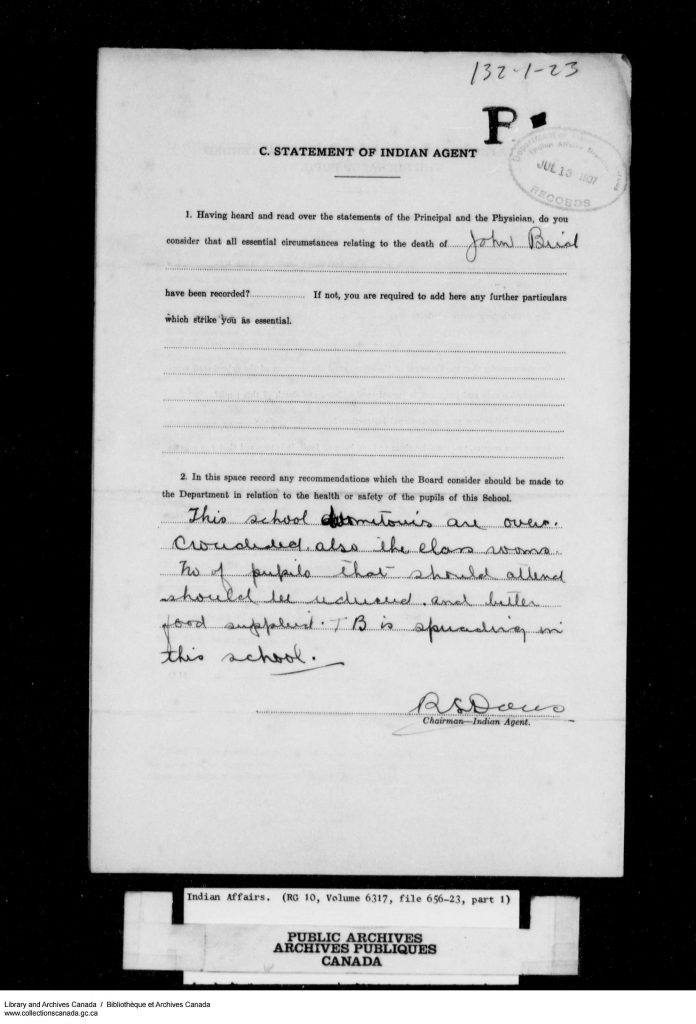 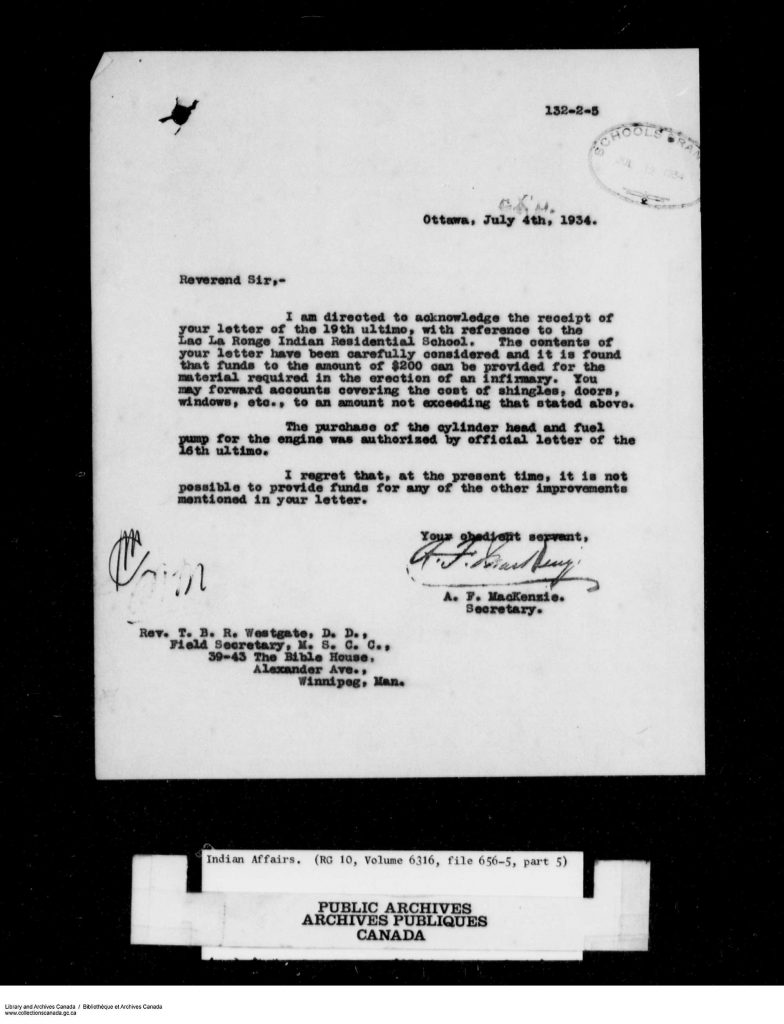 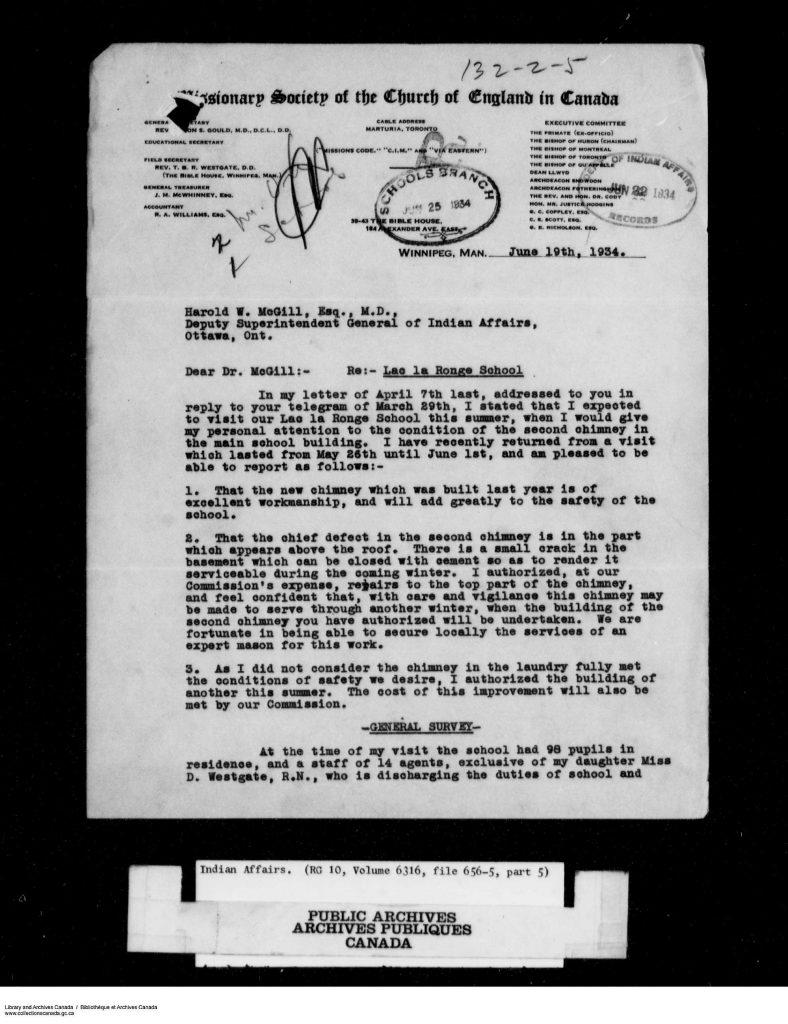 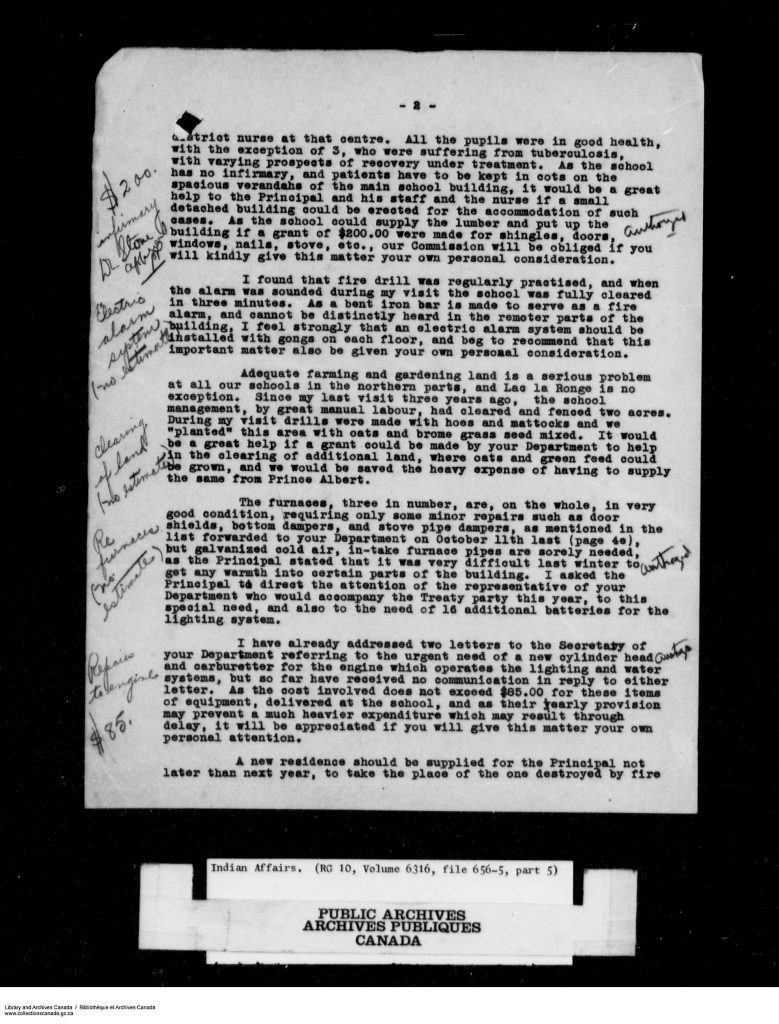 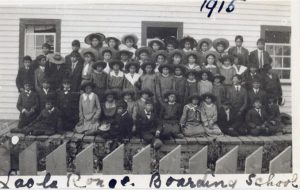 Treaty 6 negotiations included a school on the Montreal Lake Reserve. However, because members of the reserve hunted and fished for part of the year, government officicals believed that a day school would not be successful. It was recommended that a boarding school be established on the reserve instead. In 1890, Indian Agent J. J. Campbell told the Montreal Lake Cree people that when they gathered together on the reserve and erected a school, the Department of Indian Affairs would issue a grant for its construction and for the teacher’s salary.

A log building  21 x 32 ft with a 13 ft ceiling, and tin shingles was constructed in 1891, belonging to the Anglican Church of Canada. Mrs. Stanley, the farming instructor’s wife, was appointed teacher. The daily average attendance was reported to be over 28. However, Archdeacon MacKay, opposing day schools, wrote to Indian Commissioner Hayter Reed in 1891 suggesting that, rather than starting small boarding schools in the North, the Department should increase their grant to Emmanuel College, an Indian boarding school in Prince Albert. MacKay’s suggestion was acted upon in November 1895, when the Montreal Lake School closed and 10 girls were admitted to Emmanuel College.

However, the Montreal Lake School was reopened in the fall of 1896 and Rev. Thomas Clarke was appointed teacher. John R. Settee, a 39-year-old, Cree- and English-speaking Metis and a founder of Stanley Mission was the teacher on the reserve from 1904 to 1924, when he transferred to Big River Reserve School. The DIA began looking for a replacement for Mr. Settee after a 1918 report that the children he was teaching did not understand English. A letter signed by William Charles, Patrick Bird, and Duncan Bird was written in 1918 to the Department of Indian Education in support of Mr. settee: “Mr. Settee is doing good work, and all the Indians like him. He can speak both languages and that is the kind of man we like to have in our midst.” The letter goes on to explain that the reason for the lack of performance in students is due to the fact that it is “impossible for the Indians to keep their families on the reserve. They have to leave for hunting grounds and take their children away.” They had heard their school might be closing, so they requested a “place of residence for the pupils where they could be by their parents to attend school.”

Though a graduate of Emmanuel College, Mr. Settee received only $300 as an annual salary, and this was raised to $400 in 1920, after Mr. Settee requested a raise. Mr. Settee’s 1924 replacement, Englishman Mr. Pereira, received $800 and was a qualified teacher.  The Pereira’s stayed two years, and despite success in increasing parental interest in the school, and thus attendance, they returned to England because Mr. Pereira was concerned about his teacher pension. Mr. Lowe took the position and was at the school for nine years. However, the place was falling apart and dirty and so it was determined that he should be moved from Montreal Lake and exchange positions with Mr. Plunkett who was teacher at Red Earth School. Mr. Plunkett did not want to leave his position at Red Earth but was forced to make the change. He found conditions hopeless at Montreal Lake School and refused to move into the teacher’s residence. His wife was expecting a baby in the winter. However, requests for a new residence and school were denied, and the government communicated its expectation that the cost be covered by the Anglican church who owned  the building. He was forced to take the residence with no other options, and his wife took ill in the spring after the birth of the baby. By 1937, Mr. Plunkett’s work had become unsatisfactory, but the church argued that it was the existing conditions of the school, not the teacher who had been “doing good work” at Red Earth. The church offered to hand the buildings over if the government would agree to make necessary alterations. The federal government agreed that the conditions might be the cause and requested that Mr. Plunkett be transferred to another school. Mr. Stenhouse took the position with a salary of $85 per month. (School Files Series – 1879-1953 (RG10), Vol. 6290). 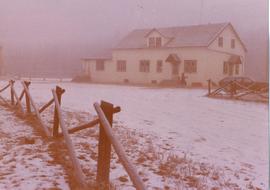