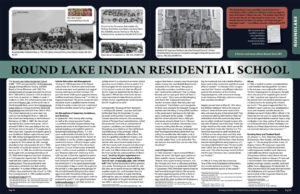 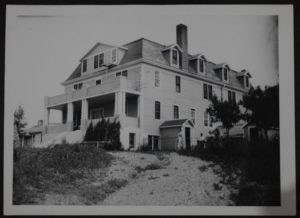 The Round Lake Indian Residential School (1888 – 1950) was operated by the Presbyterian Church (Foreign Mission Society and later Board of Home Missions) until 1925. The United Church of Canada operated the school from 1926 until its closure in 1950. Enrollment went from 10 students in 1884 to its peak 77 students in 1942. The school was located at the east end of Round Lake, on the north side of the Qu’Appelle River, across from Ochapowace Indian Reserve on Treaty 4 land. Reverend Hugh McKay was principal from 1884 to 1921. The school had started out as a one-room log cabin on the Qu’Appelle River in 1884 and had closed due to the Northwest Resistance of 1885. By 1888, Mckay had expanded the original one-room log cabin school to accommodate a capacity for 50 students and had applied for funding from the government. A number of Métis and white children were admitted to this school.

Mrs. Ross (senior teacher and wife of principal) also Criticized the Half Day System.
In 1936 Mrs. Ross also criticized the half-day system. She wrote, “a half day at school, and no study periods outside school hours is insufficient for those pupils in Grade Eight, where they are faced with a Departmental exam.” It was not possible, she wrote, to cover the material or “give the amount of drill work needed to give them a thorough grasp of their work.” Ross stated that over the past 12 years, only 18 of the students had passed their Grade 8 examination. The problem the students faced, she felt, was not one of ability, but of time and resources. She pointed out that Indian Affairs did not provide the school with copies of the authorized primer for students in Saskatchewan, choosing instead to substitute a different book. In 1937, Mary sought permission to keep several of the older girls in class morning and afternoon so they might finish their studies and attend high school. Indian Affairs responded that while girls with special aptitude should be encouraged to study, “in the majority of cases, it is felt that it is preferable to devote the last year or two of their school life to work which will prepare them for looking after their homes.”

In an RCMP report dated Nov. 30th, 1945 the Indian Agent reported to the RCMP that Joe Kinistino of Bone Lake Reserve refused to send his children to Round Lake school. When Constable Fitzgerald and the writer of the report from Yorkton detachment called at their home, Joe was not at home. His wife “stated that Joe had gone to a neighbour for the purpose of obtaining a car to convey their children to the Crooked Lake Indian School. Mrs. Kinistino was then advised of the purpose of our visit, which she apparently anticipated and she was warned in accordance with the provisions of the Act, she state that their school age children … [aged 13, 9 and 7] would be conveyed to the Crooked Lake Indian School, either this same date or the following day.” (Indian Affairs, School Files, RG 10, Vol. 6334, file 661-10, part 2)

In an RCMP report dated Sept. 10th, 1936, W. J. B. Ball, clerk for the Crooked Lake Indian Agency, called the RCMP to report that two youths, John Andrew Kakakaway and Lawrence Still, had run away from the school on Sept. 8th. Constable C. L. Donaldson from the Broadview detachment patrolled the vicinity and made enquiries at the homes of the boys’ relatives. On the morning of Sept 9th, the Indian Agent McKenzie advised the RCMP that the boys had been located on the reserve the previous night and had been returned to the school. (Indian Affairs, School Files, RG 10, Vol. 6334, file 661-10, part 1)

“Miss Orelia Dodge stated:-‘I am the Matron of the Round Lake Indian Boarding School. ON the night of the 15th of June 1919, I was told by an Indian named Roy Eggm that 3 or 4 of the Indian lads were going to break into the school that night. About 1 a.m. I was in a room upstairs, near the big girls dormitory, and heard footsteps on the stairs. I waited a short time when I saw a light under the door. I had a flashlight in my hand and went through the small girls dormitory, into the big girls dormitory. A man was in the bed with a quilt over him, and the pupil (Harriet Frnacis) was under the bed. I said to the man “William get up out of this”, which he did witht he quilt over him. I tried to pull the quilt off him but only had one had, the other holding the flashlight, and could not manage it. …

Victoria Kashane, stated as follows:-I am a pupil at the [R]ound Lake Indian Boarding School, and have been there about four years. I think I am about 16 years old. The night that Miss Dodge (The Matron) caught William Gaddie in the big girls dormitory which was about thr [sic] 15th of June 1919, Robert Bear was standing beside my bed, while Miss Dodge was away attending to Willie, Robert hit [sic] in the bathroom. The three boys I saw in the dormitory that night was Willie Gaddie, Robert Bear & Roderick Henry all Indians and ex-pupils of the school. The boys came in through the small girls dormitory, and into the big girls room. Jean Watcheson & Tiny Bear sleep in the next bed to mine. Robert Bear was lying on the floor between the two beds when Miss Dodge caught Willie. They get int ot eh school about every other night. The last time they came in was two or three days before we had our holidays, which would make it about the 25th June. When the boys come up at nights they sit on the bedsand [sic] talk to us. I don’t know what else they come up for.”

Sergt. C. Richardson then wrote: “From what I can see these [g]irls are trying to protect these boys, and it is a hard job to get much information from them. The Principal of the Round Lake School is Doctor McKay, and although he knows that this sort of thing has been going on, does not seem to adopt any measures to prevent it. In fact he suggested that the investigations be stopped. Anything that he knows about this is of course hearsay so did not get a statement from him.” (Indian Affairs, School Files RG10, Vol 6332, file 661-1, part 1)

In a letter to the Indian Agent, Mr. Taylor, dated Aug. 27th, 1919, Hugh McKay writes, “I feel discouraged and disappointed because of these things occuring at our school – we have been under a great disadvantage since building operations began, parts of the old building being taken down; the boys and girls deprived of their day rooms and much discomfort and worry for members of the staff. I am much to blame in not insisting that different locks be put on the door and fanlights above the doors and windows. …I could get no direct evidence against those boys for house breaking but as soon as I suspected I secured the windows and fanlights by n ailing on lumber, had padlocks put on the doors and other things that I thought would make the sleeping rooms secure. …I might have prosecuted William Gaddie for vagrancy – but he is one of my boys, and so much about him that I admire, his music, his song, his free-hand drawing, his affable and seeming kind disposition, I feel surely there is some other way beside having him placed behind bars. I took him into my house for tea, I talked to him pointing out the consequence of following the indolent way leading to other crimes. Mrs. McKay also talked with him and pleaded with him to be a man, to got ot work and make a home for himself – not a vagrant that everyone would despise; he showed penitence and promised to try and live a better life, we prayed with him and for him, after going out I went after him and walked with him to the bridge, he said, “I know you are interested in me and would like to see me do well.” … The school and mission has been my life work, I did not accomplish what I expected to do. During the 35 years we have been here in charge of the school there has not been a single case of a girl going astray and leaving the school in disgrace.”

Sergt C. Richardson reported Sept. 1, 1919, that he gave the boys in question a “good talking to, and also pointed out the seriosness [sic] of the offence, as per the request of Commissioner Graham….On making enquiries at the Round Lake School I find that these boys have not been around since I was there investigating this case, so think after my talking to them that they will keep away from the School in future…” (RG 10, Vol. 6332, file 661-1, part 1)

MISSION PICTURES TAKEN BY MISS MAURINE CROPP, A FORMER TEACHER AT THE ROUND LAKE INDIAN RESIDENTIAL SCHOOL THE FALL OF 1942 AND SPRING OF 1943. (Donated by her daughter Linda McIntyre Swanson)

(Right click on slide and select “view background image” to view the photo full size.) The slides above were taken in the fall of 1942 and spring of 1943 by Miss Maurine Cropp, a former teacher at the Round Lake Indian Residential School, and donated by her daughter Linda McIntyre Swanson. According to Linda, her mother, Miss Crop, “wrote on the back of some photos, listing students names and numbering some students on the front for clarification. However, after sending them home to share with her family, she trimmed the photos before gluing them in to the photo album and unfortunately many names were cut off.” Linda meticulously detailed what was on the back of each photo, using ellipses (…) when the word was cut off or deleted and adding her own observations in parentheses (Click to Download descriptions). Linda says she “hopes the photos may be found by the current families of these children and bring joy to someone who has never seen a picture of their parent or grandparent when they were school aged.” 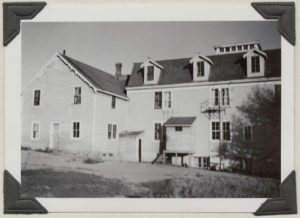 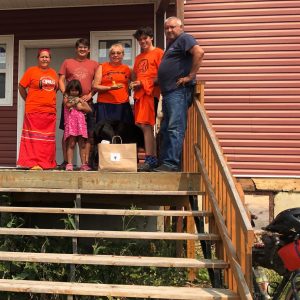 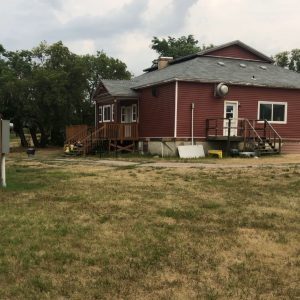 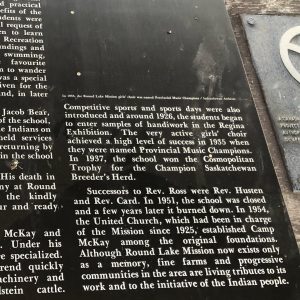 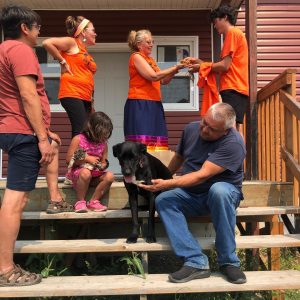