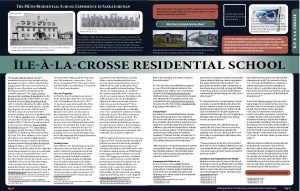 From 1889 to 1937, the federal government’s admission policy for non-Indian students at residential schools had been far from consistent. There were two institutions during this period—the Île-à-la-Crosse school in northern Saskatchewan, and St. Paul’s Hostel in Dawson City in the Yukon—that further demonstrate this lack of consistency. Both institutions received federal funding at various points in their history, even though most of the students who attended them were of mixed descent. (The Métis Experience, Vol. 3, p. 29)

In 1860, three Sisters of Charity arrived at Île-à-la-Crosse and took ownership of the newly built Le Couvent Saint-Bruno.8 According to Oblate officials, the majority of students at the school were Métis.9 In the mornings, both girls and boys were taught lessons in spoken and written French and in basic arithmetic. They also attended catechism class.10 The lessons in the common room were preceded and followed by work routines. The girls were being prepared for service as homemakers, and worked daily in the school kitchen.11 The boys did not sleep in the dormitory at the convent, but, instead, at the Oblate house, under the supervision of a lay brother.12 At 5:30 a.m., he escorted them to Saint-Bruno, where they would work, eat, and receive lessons.They spent the afternoons on farm work.13 (The Métis Experience, Vol. 3, p. 31) In 1906, the school moved to Lac la Plonge (Beauval Indian Residential School).

In 1917, the Sisters of Charity returned [from Lac la Plonge] to Île-à-la-Crosse, where a new convent, the School of the Holy Family, had been constructed on higher ground. The dormitory housed four boarders, and classes were attended by twenty-two day students.29 The school continued to be accompanied by disaster. Fire destroyed the convent on April 1, 1920. A replacement building, completed in October 1921, burned in 1925.30 Three boys and one of the teaching sisters drowned in a boating accident in September 1923.31(The Metis Experience, Vol. 3, p. 32)

Mike Durocher, a student at Île-à-la-Crosse for nine years, said life was governed by “a regimental time clock dictated by Church functions.”20 On the regimented life, a student from a different school said, “We were trained like dogs—clap you get up—two claps you go eat—three claps maybe you go outside.”21 Punishment for breaking rules was humiliating. (The Métis Experience, Vol. 3, p. 49)

Robert Derocher said that some staff preyed on the students’ loneliness: “It seemed that he knew how to pick the, the children that were hurting and to give them any kind of attention that we were all looking for; even if it was not good.”32 (The Métis Experience, Vol. 3, p. 49)

According to Robert Derocher, at Île-à-la-Crosse, bedwetters were required to “wear a diaper in front of everyone all day long.”24 (The Métis Experience, Vol. 3, p. 48)

Allen Morin said that Île-à-la-Crosse was a world run by non-Aboriginal people.

I remember the teachers used to come there from September to June, and then they’d leave, and then a new pack of teachers would come in, and they were all non-Native, and to me, I was thinking how come, how come they’re coming in and leaving? And I thought, well, I guess that’s because we’re Indians and they’re, and they’re non-Native, and then only non-Natives can be teachers, or professionals, or priests, or stuff like that. And they were kind of, I think they were kind of, they separated themselves from the community, we, we didn’t mingle with them.28 (The Métis Experience, Vol. 3, p. 49)

In speaking about the life at Île-à-la-Crosse, one former student, Mary Jacobson, said that although she thought the nuns treated the students well, the students were disciplined for poor performance in the classroom. Jacobson said that “we didn’t learn, that is our fault if we get a licking. Because we got to try to learn and they want us to learn something.”42 (The Métis Experience, Vol. 3, p. 51)

Because boys and girls were kept separate, families were broken up. This was a practice that continued into the 1950s. Alphonse Janvier recalled that at Île-à-la-Crosse, “you were not allowed to talk to them because this playground had an imaginary boundary that we could not cross. We talk about it now and we wonder why we had to put up with that. We used to eat in the same dormitory with a wall dividing us and two doors and we used to wave at each other and that was the only way of communication with my nieces.”56 (The Métis Experience, Vol. 3, p. 53)

Over time, there was an increase in the number of Métis people who worked at the schools.Thérèse Arcand, who became the first Métis graduate from Île-à-la-Crosse to enter the order of the Sisters of Charity, returned as the result of a bittersweet inspiration. As she prepared to leave the school in March 1929, she came across a girl who had just arrived. “She was crying. I then said to myself. ‘I will go in training and come back to help my people.’ that was my last thought while in Ile-à-la-Crosse.”61 (The Métis Experience, Vol. 3, p. 54)