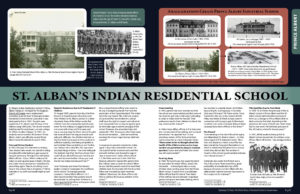 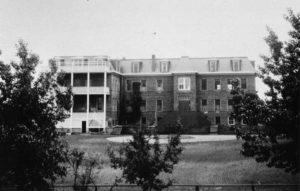 And then we seen this army covered wagon truck, army truck outside the place. And as we were walking towards it, kids were herded into there like cattle, into the army truck. Then in the far distance I seen my mother with my little sister. I went running to her, and she says, “Leona,” she was crying, and I was so scared. I didn’t know what was going on, I didn’t know what was happening. My sister didn’t cry because she didn’t understand what we, we were, what’s gonna happen to us. Anyway, it was time for me and her to go, and she, when we got in that truck, she just held me, pinched me, and held me on my skirt. “Momma, Momma, Momma.” And then my mother couldn’t do nothing, she just stood there, weeping. And then I took my little sister, and tried to make her calm down, I just told, “We’re going bye-bye, we’re going somewhere for a little while.” Well, nobody told us how long we were gonna be gone. It’s just, like, we were gonna go into this big truck, and that’s how, that’s how it started.60 (Survivors Speak, p. 25)

She received a settlement for being sexually abused in residential schools but she says it did little to alleviate the long lasting effects on her and her family. She explained,

Leona Bird grew up fearful and angry at school.

They are girls from Manitoba, girls from different places. They weren’t too friendly with me. I learned to fight. The hatred that built up in me, I learned to fight my way out of everything that I can, whether a beating or not, I didn’t care, as long as I fought back. That’s how hatred was building up so big there inside my whole body. I couldn’t do nothing.614 (Survivors Speak, p. 167)