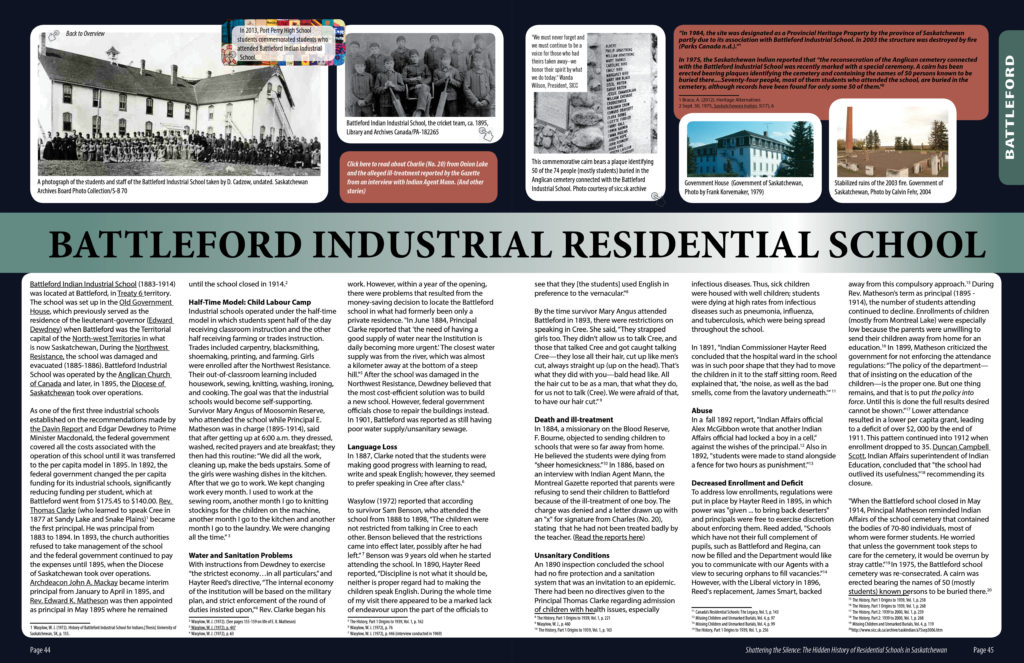 Battleford Indian Industrial School (1883-1914) was located at Battleford, on Treaty 6 land. The school was set up in the Old Government House, which previously served as the residence of the lieutenant-governor (Edward Dewdney) when Battleford was the Territorial capital of the North-west Territories in what is now Saskatchewan. During the Northwest Resistance, the school was damaged and evacuated (1885-1886). Battleford Industrial School was operated by the Anglican Church of Canada and later, in 1895, the Diocese of Saskatchewan took over operations.

I have to request that you will, if the facts are not already known to you, make careful inquiry into the [—] and refute what foundation, if any there is for the allegation that an Indian boy from Onion Lake was treated in the manner alleged by the Indians and the reasons for the same.

“Have you got a school here?”: No, but the Indians are anxious to get one. Owing to the alleged ill-treatment of an Indian boy at the Battleford Industrial school a few years ago, parents here object to sending their children to Battleford.

“What is the treatment you referred to?”

“The Indians say the boy alluded to, not conducting himself to the taste of the master’s fancy, he was turned out of doors to live as best he could or die. The boy roamed about Battleford for months and finally got here.”

“I left the Industrial School at the time of the outbreak of the late rebellion and joined Poundmakers [sic] band. After the Rebellion was over I returned to Battleford and worked for a Halfbreed for a time, and when I left him I worked for Smith the baker and this summer I went up to Fort Pitt and stayed there nine days and returned to Battleford, and have been here since last fall, the Rev. Clarke wanted me to return to the School but I did not return, during the time that I was at the school I was never ill treated by the teacher. I did not see Mr. Mann the Instructor at Fort Pitt nor did I ever state to him that i had been illtreated [sic] during my time at the school. I am now working for the Hudsons Bay Company, and getting $35.00 per month and board. I am now eighteen years of age.”

History of a building (submitted by Frank Korvemaker):

The transformation of Government House into a residential school saw an enlargement of the building, plus the conversion of the roof into a series of bedrooms on the second floor.  Here is a quick visual evolution of the building from its construction in 1876-77 until its destruction by fire in 2003