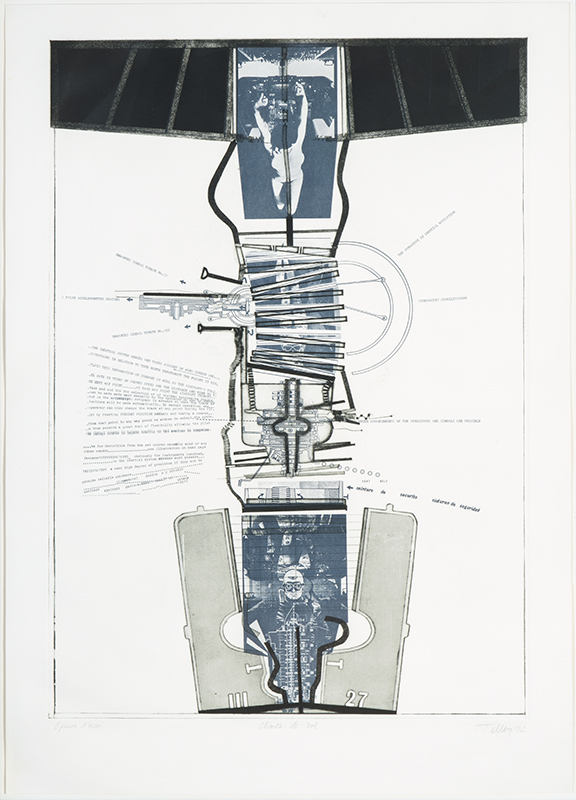 © Eugenio Tellez. Reproduced with the permission of the artist. Photograph by the University of Regina.

Chilean-born artist Eugenio Tellez spent the sixties and seventies traveling the world and collaborating with a number of significant artists. Tellez was thirty-three at the time he made Charte de Vol, by which time he had already held directorial positions at the Atelier 17 etching studio and Ben Shahn Graphic Workshop in Paris and Maine respectively, as well as teaching at the University of Illinois and appearing in numerous international exhibitions. His 1970 appointment as professor of Fine Arts at the University of York brought him to Canada, where he exhibited with Marlborough Godard Gallery in Toronto and from where this print was purchased.

Charte de Vol (Charter Flight) is a complex image featuring a totemic structure, diagrams and bursts of English, French and Spanish text. Mechanical jargon is intertwined with descriptions of an aircraft in flight. The text, arranged in dynamic beams radiating from the central illustration, appears to have been appropriated from a manual.

In this and other work, Tellez presents objects with abstracted characteristics of the human body. Here, the shape of the aircraft takes on a subtle human form. Additionally, two jarring figures appear in cockpits: an outstretched woman appears as if a figurehead, whilst an impassive pilot stares at the viewer through goggles below. A central theme of Tellez’s work is the discovery of America, colonization and cultural identity. He explores this via maps, which recur in both real and imagined manifestations in his work. Here, mapping is alluded to in the birds-eye view afforded to the aircraft, which is positioned to view lands and territories permeated with complex histories and struggles. An artist statement describes Tellez’s practice thus:

His works form disparate time and space zones in which atavistic sacrifices and naked warriors coexist with transcontinental missiles and supersonic airplanes, with mockingly childish doodles, comic book sketches or quotations from art history and invented maps. This creates an aesthetic of fragmentation and discontinuity, of simultaneous spaces and times. He mixes personal experiences with universal history in pictograms which incorporate a particular repertory of identifiable icons. The worlds he creates break up, they are battlefields full of explosions which echo civil, regional and world conflicts. [1]