Yueming Liu first visited the University of Regina, Faculty of Education as a visiting scholar between 2011 and 2012, sponsored by the China Scholarship Council. The experience influenced her decision to return to the University of Regina for her PhD program in Education. Liu says, “I observed quite a few classes during that year, including Dr. Paul Hart’s methodology, three of Dr. Andrea Sterzuk’s classes related to second language acquisition, and Dr. Douglas Brown’s sociology class and some others. These classes brought me into the academic field and planted a seed in my heart. The emotional bond that I’ve developed with the faculty and the respectable professors brought me back here to do my PhD degree.”

Lui was born and raised in the capital city of a northeastern province in China where she did her undergraduate degree in a Top 20 university, majoring in British and American Literature. After graduating, Liu became an English instructor in the university where she had studied. Because the city is not an international metropolis, Liu says, “Learning about a different language and culture here, like in many other inland cities in China, means that one has limited access to native English speakers and real-life intercultural encounters. Textbooks and the Internet are the primary sites where English learners encounter the target language culture. Addressing the intercultural dynamic is a challenging pedagogical endeavor here when students do not enjoy exposure to real-life culture of English-speaking countries, requiring creativity on the instructors’ part.”

Liu’s interest in her research topic, “Exploring Chinese Instructors’ Perceptions and Practices of Integrating Culture into Tertiary-Level English Education: A Case Study,” was sparked by her own intercultural experiences. She says, “Five years of living and studying in Canada was a transformative journey for me. I was able to be truly involved in communications with people from diverse cultural backgrounds. These experiences caused me to rediscover the complexity of intercultural communication and cultural teaching. I found truth in what Sewell (1999) concluded: Intercultural communication is ‘shot through with willful actions, power relations, struggle, contradiction and change.’ By then, I had started to question the common practice of teaching the generalized culture as bounded by geographic borders. Although a generalized cultural sketch is usually the starting point of one’s journey towards intercultural understanding, it should by no means be the end point. Efforts need to be made to help learners to transcend it. A generalized sum-up of any culture can be incomplete, unfair, destructive, and condescending. A transpired generalized inclination tends to jeopardize, rather than facilitate, intercultural communication. These realizations made me want to see how today’s English instructors in Chinese higher educational institutions conceptualize and approach culture and what efforts they are making to prepare their students for complicated and unpredictable intercultural encounters. As a language instructor myself, I realize how essential it is for us to reflect on and have a clear understanding of our own pedagogical philosophy. Language instructors’ pedagogical conceptualization of culture influences how language learners construct intercultural knowledge, develop intercultural attitudes, adjust intercultural behaviors, and perform intercultural roles.”

Through her research, Liu found that “instructors’ pedagogical conceptualizations of culture significantly influence how language instructors identify cultural points, contextualize culture for pedagogical purposes, and scaffold student meaning-making. The participants conceived culture more as a noun, with its referential meaning ready to be transmitted to the learner in form of objective knowledge, than as a verb (Street, 1991), with its meaning to be explored and interpreted in dynamic social interactions. Further, they perceived culture more as social constraints, in the form of cultural norms that demanded conformity, than as public resources that could be drawn on strategically and creatively to serve purposes. In addition, they viewed culture more as value-free, something that could be grasped at the denotative level, than as value-laden with its barely known face hidden under the veil of cultural myth (Barthes, 1957). This way of conceptualizing culture has limiting effects on classroom meaning-making: the referential, normative (conventionalized), and generalized meaning of culture were highlighted and the personalized, symbolic, and ideological meaning of culture were largely underexplored.”

What impressed Liu most about her findings is that “most participants contextualized culture in self-sanctioned ‘purified’ ways to block off cultural dissonances and there was a general resistance towards problematizing cultural meaning and engaging learners in ‘struggles over meaning.’ I pondered on the possible consequences of portraying smooth cultural landscape and papering over the complexity and ambiguity of culture and how this practice will influence which meanings get inactivated in the classrooms. As I see it, the inadequacy is obvious and profound and this issue deserves more attention from language instructors.”

The research project was memorable for Liu because, she says, it “gave me opportunities to talk to my fellow colleagues, listening to their experiences of teaching culture and observing their practices in the classrooms. This was an exciting and discovering process, during which I reflected on the insights provided by the participants and developed an in-depth understanding of the complexities and challenges involved in culture teaching.”

As recommendations for future research, Liu says, “The meaning-making potentials of the current culture instruction could be expanded through exploring poststructuralist perspectives on culture and reorienting culture pedagogies towards individual-level culture, problematized cultural meanings, and more agentive cultural competence.”

Liu says, “I hope that more practicing language instructors could interrogate their pedagogical philosophy before making attempts to address culture within language classroom. I hope that the inadequacy of tourist-like culture teaching could be widely recognized and dealt with. The increasingly complicated nature of transnational communications poses new challenges for intercultural language education and I hope practicing instructors could take the initiative and seek ways to expand the meaning-making potentials of classroom activities.

Following the completion of her Phd, Liu returned to her university in China to teach undergraduate students English as a foreign Language.  “I feel thrilled at the thought of being able to continue working in the field of intercultural language education. I’m looking forward to working with both teachers and students to conduct action research to practice some of my pedagogical ideas concerning culture teaching. Creating opportunities for students to carry out ethnographical project on culture and applying discourse analysis in culture learning, these are but a few possibilities that are waiting for me to try my hands on,” says Liu.

Liu feels grateful for her experiences at the University of Regina, which she says, “helped me to transform from an instructor to a researcher. The classes I observed during 2011 and 2012 led me into the academic world. For the first time, I got to study educational research methodology in a systematic way. I learned how to design and carry out a sound research project. My supervisors, Dr. Abu Bockarie and Dr. Dongyan Blachford guided me in the field of my research area and supported me all the way when I felt overwhelmed by the complexity of culture and culture teaching. I am filled with gratitude for the professors I met here in Regina.” 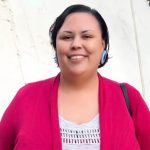 Congratulations to PhD student Jessica Madiratta for being awarded $20,000 for the 2022-2023 Queen Elizabeth II Centennial Aboriginal Scholarship.
“Jessica is obtaining a Doctorate of Philosophy in Education Studies from the University of Regina. Her research is the first of its kind in the province and will explore how building a community of educators over multiple culturally responsive professional development sessions can impact instruction in the classroom and benefit the academic achievement of Indigenous students. This scholarship is awarded annually based on academic excellence.” (Source: Saskatchewan Students)

Donors to the U of R share in the University’s commitment to creating and promoting a more equitable system that fosters diversity and inclusion.

“This commitment to well-being and belonging was no more evident than in the $25,000 donated by Agnes Stephanson-Cooke to endow the Black Teachers Matter Scholarship in 2020 – an award that will support a Black undergraduate student in pursuing a degree in the Faculty of Education in their final year.

“It’s a huge commitment by Agnes to trust us and our Faculty and our University to carry forward this gift with her name,” said Dr. Jerome Cranston, Dean of the Faculty of Education at the University of Regina. “It brings me tremendous joy to know that there are people like Agnes out there. Her foresight and her willingness to have her name associated with this gift is huge.”

Dr. Cranston was quick to give credit to his Faculty of Education colleague Stephen Davis, who came up with the concept and name of the award. “I felt that this was needed to recognize the important role of Black educators in Saskatchewan and celebrate the brilliant and gifted educators that we have at the University of Regina,” Davis said. Both Dr. Cranston and Davis recognize the enormous impact that the award will have.

Read the full story on the U of R Front Page

If you would like to help a student in need, visit our donor page and consider supporting one of our Faculty’s funding priorities:  https://giving.uregina.ca/pages/fundraising-priorities/education 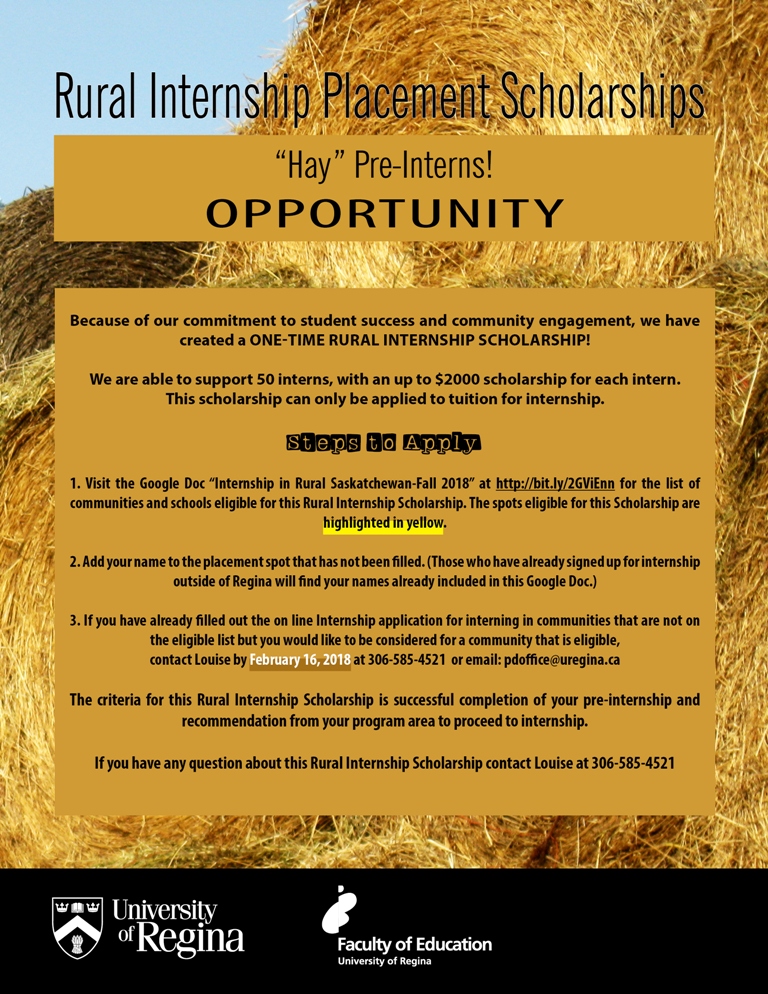 Because of our commitment to student success and community engagement, we have created a one-time Rural Internship Scholarship!

We are able to support 50 interns, with an up to $2000 scholarship for each intern.
This scholarship can only be applied to tuition for internship.

2. Add your name to the placement spot that has not been filled. (Those who have already signed up for internship outside of Regina will find your names already included in this Google Doc.)

3. If you have already filled out the online Internship application for interning in communities that are not on the eligible list but you would like to be considered for a community that is eligible, contact Louise by February 16, 2018 at 306-585-4521 or email: pdoffice@uregina.ca

The criteria for this Rural Internship Scholarship is successful completion of your pre-internship and recommendation from your Program area to proceed to internship.