In May 2019, alumna Heather Faris (formerly Haynes) got the news that she was a recipient of the Prime Minister’s Award for teaching excellence in STEM. Regina-raised Faris’s first thoughts were, “It’s just what I do! Talent is from God. I have a wonderful opportunity in this school to get to be the off-beat, artsy-thinking teacher. I’m like, get an award for it?! I did not expect it and it was such an honour!” Faris adds, “When my principal told me that she was working with a group of people to nominate me, it brings a person to tears, it’s so humbling…but at the same time affirms that this is what I am built and born to do.”

Surprisingly, Faris wasn’t always headed for the teaching profession. She had an interest in biology, which began with dissecting earthworms in Grade 7 and with a love for the outdoors: “Just being outside on the farm with my Grandpa, walking in the fields, gardening, and knowing that I loved being outside in a way that not everybody did.” Thus, her first year at the University of Regina, after graduating from Sister McGuigan High School in 1989, was spent studying biology with the goal of becoming a vet. “My art teacher, Rand Teed, had set me up in high school with the Regina Animal Clinic,” she explains. Then, because she would “pass out every time they started to operate,” Faris decided some hands on experience at the Humane Society would help her and it did.

However, two years of working with animals at the Humane Society had given Faris a clearer view of what she wanted to do: she decided to become a teacher. “I was that kid who had the classroom set up in my basement and corrected work. I found it really fun then,” she laughs. In 1995, Faris graduated with her B.Ed. After travelling a bit, she then came back to teach as a substitute in Regina Catholic schools. After only two days of subbing, she was interviewed and given a short term contract at St. Augustine Community School to teach Grades 5 to 8 science. Then she was hired full-time at Archbishop M. C. O’Neill High School. Thus began her, at this point, 22-year teaching career, including teaching science at Dr. Martin LeBoldus and currently senior science teacher at Miller Comprehensive High School.

When asked what qualities she thinks make for excellence in teaching, Faris responded, “There are a lot of qualities that make a good teacher that I possess but others don’t necessarily possess. An 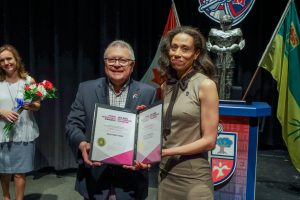 d others possess qualities that make them good teachers that I don’t necessarily possess. So we are not all the same, we are very different. But a quality that makes me a good teacher is that I’m creative. I love creating, I wake up in the night because I realize how I can re-imagine that lesson and make it better. That’s one of my strengths.” Faris believes that all scientists are creative beings, pointing to Leeuwenhoek, DaVinci, and Bacon.

A second quality that makes for excellence is being observant. Faris’s science teaching has been inspired by what an art teacher once told her: “Draw what you see, not what you think you see.” For Faris that means, “Observe what you see, what you hear, what you smell, what you taste, what you touch. Not what you think you see, hear, smell, taste, and touch.” One can achieve this, she says, “by really being in the moment. I tell my students to walk through life with their eyes open. That means don’t put in the headphones, or put up the hoodie. Look around and ask, ‘Why does grass not grow under a pine tree but it grows under the deciduous trees? Why do these trees have seeds and those trees do not? Trust in yourself to hypothesize as to why.’ It’s the synthesis of life when you walk with your eyes open.”

Passion for learning is a third quality that Faris thinks is important to demonstrate. She is a model of active learning for her students as she continues to learn. As an example, she says, “All my students know I have guitar lessons on Tuesdays at 3:30.”

Faris’s passion for learning extends to her craft in teaching biology. In 2010, Faris returned to the U of R to do a Master’s in Education. Through her research, she tested her own hypotheses about teaching and learning biology. She knew the follow-the-recipe approach to labs had to change for science to become richer and more engaging for her students. Following a set of instructions and modelling the steps was not giving students an understanding of why the experiment worked or didn’t work. She developed a new lab procedure, which she now calls an investigation or inquiry rather than lab: “I called it turning labs inside out. Push the bottom to the top. Leave the middle out, get there how you want to.” In their investigations, students are given an endpoint, for instance to create osmosis diffusion, and they are given all the materials they need to achieve the endpoint. No instructions are given. Students then spend one day in the library to discover how the materials work and what they do. Then they are given five days to play. They work in teams and can consult with other teams, but not her. At the end, students do photo write ups. “The story takes us on paths of things that didn’t work and things that did, to the end point. So much of science is what didn’t work. Like cancer research is not a direct path to success. The students told me it taught them to stick with it and not to give up. And about how big small successes were when they had a hypothesis about something such as how Benedict solution works.” The research validated what Faris was doing and hearing from her students about how they were engaged. 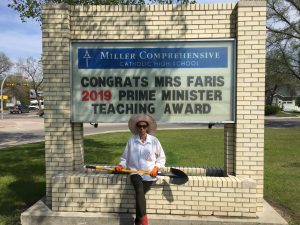 Excellence for Faris has also developed through participating in curriculum development with the Ministry of Education, through research opportunities such as an NSERC CRYSTAL project, and through seeing connections within the science curriculums, such as biochemistry and its connection to the health sciences and body systems.

Faris sees her role as being effective because of her care of students, more than a love for science: “I don’t just teach my students science. Science is my vehicle. At the end of the day, it is not about these facts of science. At the end of the day [it’s about] if I can teach them about the love of learning, about being their awesome selves, and about being where they are. They come here to learn about who they want to be in the world.” Faris considers her students the wind beneath her wings: “When they come in and say this is my favourite class, I say, really? We haven’t even done anything cool yet.”

As Faris considers her future steps, she says, “I’m just walking and things unfold. We will have to see how it unfolds. I’ve never experienced a change I didn’t like better.”