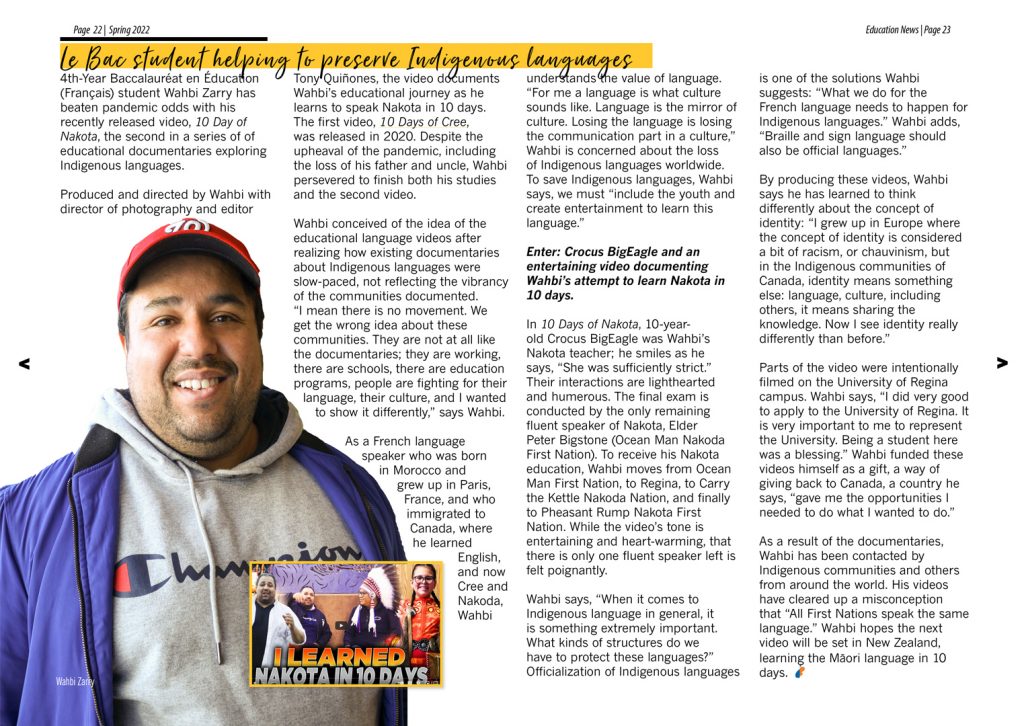 Produced and directed by Wahbi with director of photography and editor Tony Quiñones, the video documents Wahbi’s educational journey as he learns to speak Nakota in 10 days. The first video, 10 Days of Cree, was released in 2020. Despite the upheaval of the pandemic, including the loss of his father and uncle, Wahbi persevered to finish both his studies and the second video.

Wahbi conceived of the idea of the educational language videos after realizing how existing documentaries about Indigenous languages were slow-paced, not reflecting the vibrancy of the communities documented. “I mean there is no movement. We get the wrong idea about these communities. They are not at all like the documentaries; they are working, there are schools, there are education programs, people are fighting for their language, their culture, and I wanted to show it differently,” says Wahbi.

As a French language speaker who was born in Morocco and grew up in Paris, France, and who immigrated to Canada, where he learned English, and now Cree and Nakoda, Wahbi understands the value of language. “For me a language is what culture sounds like. Language is the mirror of culture. Losing the language is losing the communication part in a culture,” Wahbi is concerned about the loss of Indigenous languages worldwide. To save Indigenous languages, Wahbi says, we must “include the youth and create entertainment to learn this language.”

In 10 Days of Nakota, 10-year-old Crocus BigEagle was Wahbi’s Nakota teacher; he smiles as he says, “She was sufficiently strict.” Their interactions are lighthearted and humorous. The final exam is conducted by the only remaining fluent speaker of Nakota, Elder Peter Bigstone (Ocean Man Nakoda First Nation). To receive his Nakota education, Wahbi moves from Ocean Man First Nation, to Regina, to Carry the Kettle Nakoda Nation, and finally to Pheasant Rump Nakota First Nation. While the video’s tone is entertaining and heart-warming, that there is only one fluent speaker left is felt poignantly. 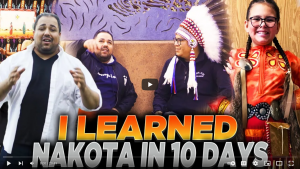 Parts of the video were intentionally filmed on the University of Regina campus. Wahbi says, “I did very good to apply to the University of Regina. It is very important to me to represent the University. Being a student here was a blessing.” Wahbi funded these videos himself as a gift, a way of giving back to Canada, a country he says, “gave me the opportunities I needed to do what I wanted to do.”

As a result of the documentaries, Wahbi has been contacted by Indigenous communities and others from around the world. His videos have cleared up a misconception that “All First Nations speak the same language.” Wahbi hopes the next video will be set in New Zealand, learning the Māori language in 10 days.

Watch the video at https://www.youtube.com/watch?v=kzIBEZIBrps