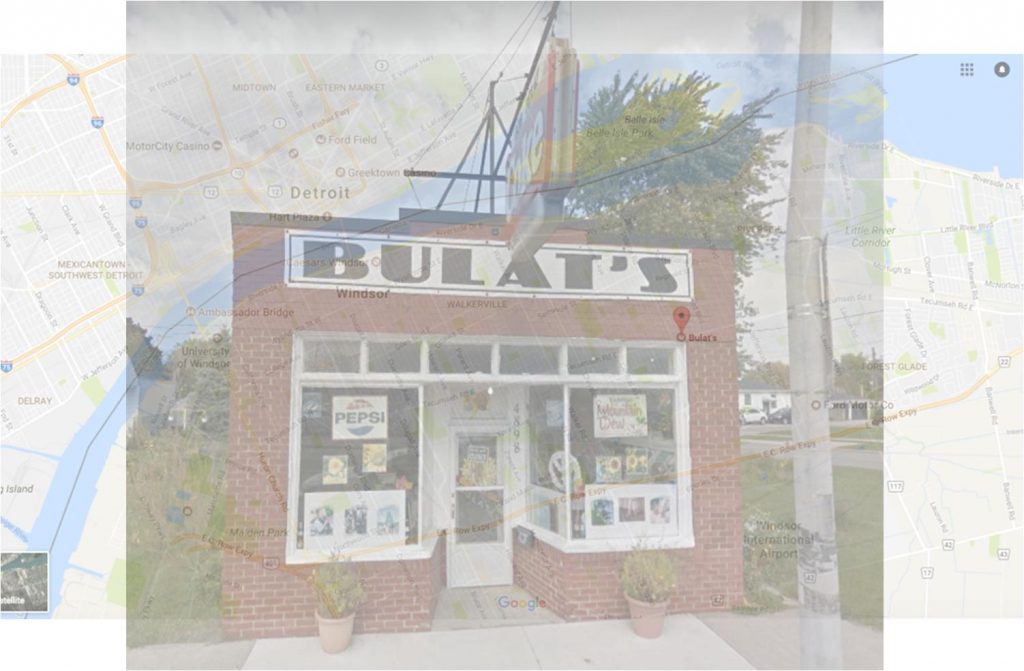 The stories of Windsor through carto elicitation exhibit

The Art Gallery of Windsor

Terry Sefton from Windsor (cellist) and Kathryn Ricketts from Regina (dancer) have been experimenting through residencies in the Listening Lab at the University of Regina with a term we are calling “carto-elicitation.”

We propose these stories are underpinned by specificity of place and plan to extend the artefact provocation of Anthropology of the Discard with cartographic elicitations to test if this is true.

We will request that the participants of this exhibition target a place that holds a potent memory, perhaps the first time or the last time something happened. Maps are provided in the gallery space where brief poetics are combined with cartographic identifiers. This is combined with an online mapping which captures the mapped and verbal stories and this collective map is projected with sound files of the stories running throughout the visiting hours of the exhibition. This virtual addition to the exhibition will be facilitated by an app that can be easily accessed on or off site.

Finally, Kathryn and Terry will perform the Windsor Stories live with live cello and dance/theatre improvisations based on the improvisations systems they have defined throughout their residencies together. This work together will be an unfolding narrative of the stories that linger in the place of Windsor.

This work is part of an upcoming exhibition at the Windsor Art Gallery titled Downtown/s Urban Renewal: Today for Tomorrow, the 2017Art Gallery of Windsor’s Triennial of Contemporary Art.

The exhibit runs form October 21, 2017 – January 28, 2018 and will accumulate public stories of Windsor through video and performances over this period.

For more information please contact
Kathryn Ricketts at 604-788-4022 or rickettk@uregina.ca

Terry Sefton began playing professionally with the Regina Symphony while still in her teens, and worked with the BBC Welsh Orchestra, the Canadian Opera Company, and Orchestra London Canada for over 30 years. She has performed as a chamber musician in Canada, the US, Britain, and France. Over many years, she has worked with contemporary composers, developing and performing new works, at a number of new music venues including Concerts de Musique Contemporaine in Montreal, the Music Gallery in Toronto, and Aeolian Hall and Museum London in London, Ontario, and the Listening Lab in Regina, Saskatchewan. Terry most recently commissioned new works by composers Martin Kutnowski (St. Thomas University, 2016) and Bentley Jarvis (Ontario College of Art and Design University, 2015), and developed improvised performances of carto-elicitation with Kathryn Ricketts (University of Regina, 2016; University of Windsor, 2017). Terry Sefton holds a Bachelor of Music in Performance from McGill University, a Master of Education from University of Western Ontario, and a PhD from University of Toronto. Dr. Sefton is Associate Professor at the University of Windsor.

Kathryn Ricketts has been working for the past 35 years in the field of movement, theatre and visual arts, presenting throughout Europe, South America, Africa and Canada. Her work in schools, galleries and community centers focuses on social /political issues with movement, theatre, creative writing and visual art as the languages. Her Doctoral research furthered this into areas of literacy, embodiment and cultural studies with a method she has coined Embodied Poetic Narrative.  She is an Assistant Professor in the Faculty of Education in the University of Regina as the chair of the Dance area. She runs The Listening Lab, a visual and performing arts ‘incubator’ and presents exhibitions and performances in her loft in the John Deere Tractor Building.