SUNTEP students Alicia Reiss and Daylyn Benoit presented a workshop entitled “Schools: Past, Present, and Future: Reflecting on Colonial History of the Past, Assessing our Current Education System, and Determining Strategies for Decolonization” on Tuesday, October 27. They began the presentation reflecting on their own experiences of negative stereotyping and essentialization in the education system, which prevented them from fully embracing their rich heritage and cultural identities as First Nation and Métis people.

After their reflections, Alicia and Daylyn conducted a workshop that gave participants the opportunity to post a card with aspects of either  “Culturally Relevant” or “Critical Anti-Racist” education on their respective squares on the wall. This activity was presented to Alicia and Daylyn this past Friday at the SAFE conference in Saskatoon by Dr. Verna St. Denis (U of S) and Dr. Carol Schick (U of R). It helped participants identify the difference between cultural relevance in curriculum and strategies for addressing power inequities in the classroom.  The bottom squares of the wall were actions and excuses of non-Indigenous peoples that allow them to forgo responsibility for teaching about Indigenous history and culture, and addressing harmful stereotypes and power inequities. Alicia emphasized the importance of being “willing to learn and unlearn together,” to unpack the sometimes subtle and not-so-subtle forms of racism in education.

Their presentation was peppered with quotes from bell hooks, Verna St. Denis, and Peggy McIntosh. The students also stressed that Indigenous education should not be optional, but should be as much a part of the curriculum as math is. Alicia and Daylyn offered options for decolonizing teaching, such as the Blanket Exercise and an image of the Métis Two Row Wampum (click through photos below to see a Wampum), which is art that follows two parallel lines that complement each other, while remaining separate. Alicia noted that the Faculty of Education is currently producing a Blanket Exercise contextualized for Treaty 4 territory, which she feels will be beneficial to the communities that live here. 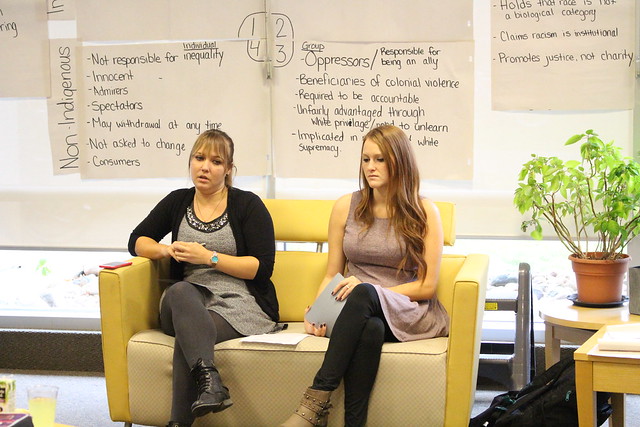 First day of classes at @UofRegina - I’m excited to meet all my new #uredu students! Watch out for tweets from my #edtc300 and #eci833 students, coming soon!