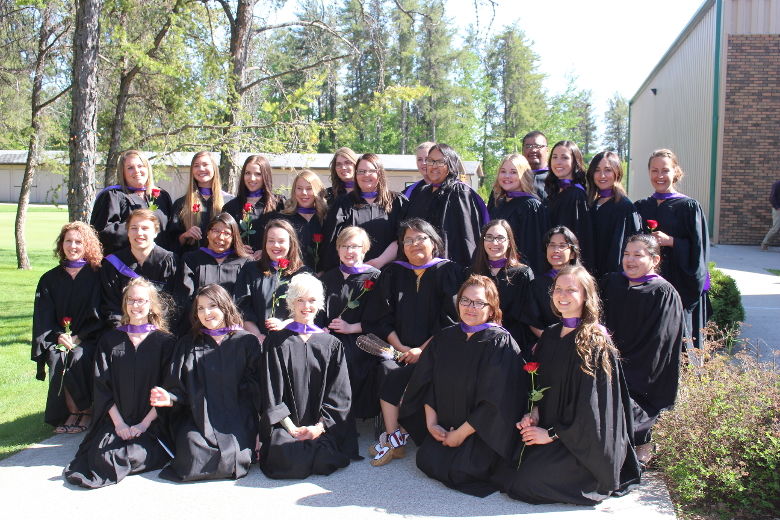 Cumberland College’s first group of four-year Bachelor of Education students are set to graduate this year and some have their eyes set on teaching positions in the Northeast.

Amy Kapeller of Tisdale did her teaching internship in Melfort at Brunswick School.

“It was a very good experience, and I liked working with that grade,” said Kapeller.

“Once we get our teaching certificates, then we can start looking for jobs,” she said. “I’d prefer Melfort or Tisdale, but anywhere in the Northeast that’s driveable to, I would work at.”

Melanie Ilnisky is one of several students who graduated a semester early. She’s already working a temporary contract position in a local Grade 5 classroom.

“This has been a great chance to get started and get ideas rolling into actions and trying out new things,” said Ilnisky. She’d like to stay in the area if she can.

“I love being around family and being in small communities, so that’s something that’s important to me, and I’d like to be able to stick around here if possible.”

As far as Ilnisky was aware, three of her early-graduating colleagues had found work close to home.

The Community-Based Bachelor of Education Program was offered at Cumberland’s Nipawin campus through the University of Regina.

Ilnisky, who is from Kinistino, was considering going to Saskatoon or Regina for school when she was offered a spot at Cumberland.

“I really liked the idea of being able to stick around family and close friends, and not having to spend the cost of going to the city, making that big move and finding a place to live and whatnot,” she said.

According to the college’s website, the program aims to “support potential students in becoming teachers within their own communities”. Cumberland hopes to train local students to become local teachers.

“That’s part of it,” said Mike Relland, who is director of community-based programs for the University of Regina. “It’s also accessibility for students. Not everyone can uproot their families and even if they’re young people, relocate to Regina or Saskatoon.”

The first four-year program was offered in Nipawin, but the new group of students starting in September will take their classes in Melfort.

“It’ll be a somewhat different cadre of courses, but otherwise it’s going to be basically the same,” said Relland.

Both Kapeller and Ilnisky noted that the small classes were a positive part of their learning experience.

Kapeller started school in Saskatoon before transferring to Cumberland.

“It was 30 people in your class compared to 300, and it was much more personal,” she said.

“It was great,” said Ilnisky. “We became like a little family.”

Everyone is talking about the new @UREdGrad @FGSR_UofR TLL M.Ed. -- Designed by teachers for teachers with maximum flexibility! Contact us today! #UREdu Book an advising appointment:
http://www.uregina.ca/education/advisingMeeting.html

A new online masters program is being offered by @UREdGrad -- Designed by teachers for teachers! Contact us today!

Tansi, ⁦⁦@RegPublicSchool⁩ educators. I hope everyone is feeling renewed and rested. I will be sharing some learning activities to support your supplemental learning plans through Twitter, as well as Youtube. Enjoy ahkamèyimok