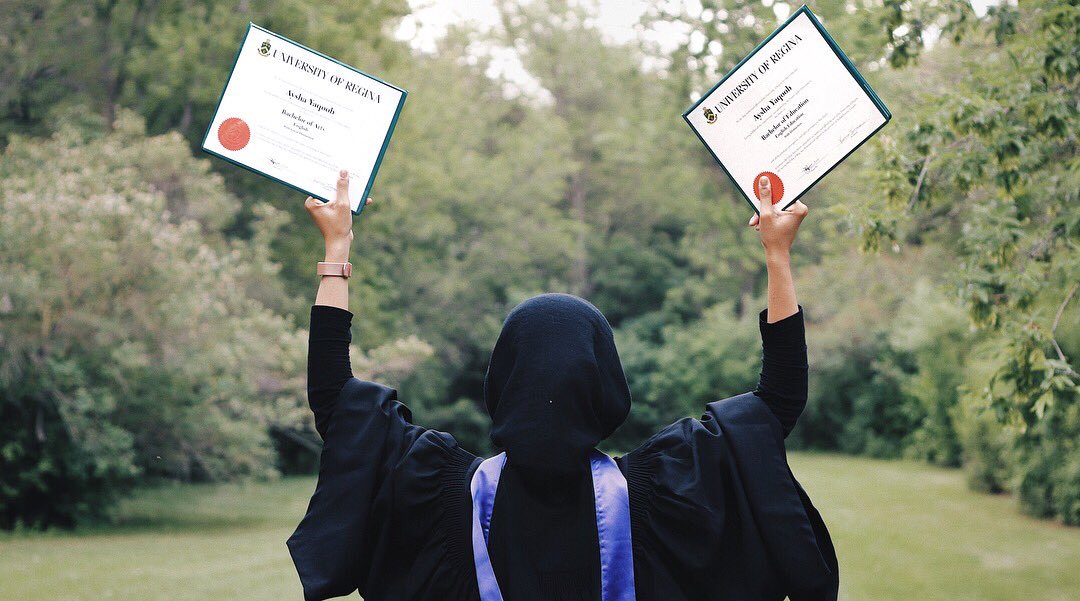 “I know in the long run it isn’t much at all, but in my way, in my journey to reconciliation, I can do this one thing.”

Aysha Yaqoob is no stranger to feelings of discomfort and dislocation. Born in Saudi Arabia and immigrating to Canada at the age of 2 with her parents, who were originally from Pakistan, Yaqoob’s early years were spent moving from place to place in the Greater Toronto Area. Then, in 2008, her family moved to Saskatoon, where Aysha attended school from Grade 7 to 12.

Attending 15 different schools during her K-12 years gave Aysha keen insight into feelings of marginality, which were amplified by being a visibly Muslim student. The lack of representation she saw in professional roles combined with her feelings of marginality sparked a desire in Aysha to work with marginal and at-risk youth, and influenced her decision to become an English teacher.

“In high school I had a great group of English teachers, and they hung out in a nice pack. It was there where I saw how dedicated they were and how fun teaching could be, and I observed their interest in teaching us not only about Shakespeare and poetry, but also about real world problems. However, there were no teachers that looked like me; all the teachers were White, and I wondered, ‘If I feel this, other students must feel this as well.’”

University gave Aysha a sense of control over her learning: “I had full autonomy of where I wanted to push my learning. I remember sitting in Mike Cappello’s ECS class, and seeing a White male talking so strongly about White privilege and what it means to oppress students of colour, and me being one of the very few students in our program who were of colour, and Muslim, visibly Muslim; it felt weird to see someone saying the words I could relate to.” Aysha wanted to learn more about representation: “After that, in every single class I took, I wanted to explore more into representation, and representing marginal and Indigenous students. All my profs were so willing to let me do assignments, I never had a prof who said you have to stick with my assignment. It was so great, I got to push my education and learning in areas that I was interested in. I was really able to shape my journey the way I wanted.”

These experiences changed how Aysha viewed education. She says, “It made me see that there are teachers who are trying to change the system right now, and trying to make students of colour feel represented and welcome. It was so nice.”

Up to that point, Aysha says she had been quiet and shy, but feeling supported at University helped her find and use her voice. “I remember that during the time when the Muslim ban was going on, I got up in front of my peers and let them know how I felt, how cornered and unsupported I felt. I invited them to a vigil at Victoria Park…Even talking about this gives me goose bumps. Just seeing all of the support I had from my peers and colleagues and professors made me want to speak up about these issues all the more. Since then I’ve been a non-stop machine; I don’t have an off button,” she says.

In 2017, as part of the Education Students’ Society executive, Aysha organized a Professional Development event called Meet-a-Muslim. She says, “I wanted to dispel misinformation about Muslims, so I invited everyone to come out and hear what it was like growing up Muslim, and about how the travel ban was affecting us. I wanted it to be an open safe space to ask questions and dialogue.” For people who are often misportrayed, Aysha explains “My go-to is to just ask questions. I’d rather you ask a billion questions than just assume.” In her quest for how to go about designing the event, Drs. Jennifer Tupper and Mike Cappello advised her to have an open dialogue with a panel. In hindsight, Aysha is glad about the panel format: “It was great that it was that way because a lot of topics came up that I wouldn’t have touched on because for me they were everyday things, even questions about why I wear the hijab and why my sister doesn’t, basic questions about Islam, and my view point on conflicts around the world. I’m not a token representative of all Muslims, so the panel gave a variety of viewpoints,” she says. The event was well-attended, one of the busiest ESS events that year, with 50-60 people attending. CBC covered the event and it was also live-streamed on Facebook.

“My parents look at me now, and they are surprised too, saying ‘You were never like this; you were so quiet and felt uncomfortable with public speaking.’ Now every chance I get, I’m out there.” Aysha credits her transformation as growing out of her experience of feeling supported by her peers and professors: It was “having that moment where I felt enough support to be vulnerable and express how I felt, and sharing that ‘your silence is hurting me,’ and getting their response in return,” she says.

Still quiet in some ways, Aysha likes to achieve extraordinary things while maintaining a low profile. Though she only walked the Faculty of Education’s halls for four years, Aysha managed to earn both a B.Ed. (English Language Arts and Social Studies) and a B. A. in English. Students typically take five years to finish a combined degree program, but Aysha, taking between six and eight classes per term, finished in four years. Aysha laughs, saying, “Nicole Glas, [Student Services Coordinator] asked her ‘Are you sure?’ I said ‘absolutely,’ but I got to the point where I wasn’t sure…I even had a course during internship!”

Pencils of Hope
As if squeezing a 5-year program into four years wasn’t enough, along with serving in the Education Students’ Society for two years (one as VP of Communications), and organizing Meet-a-Muslim night, Aysha maintained her own photography business, and founded a charitable organization called Pencils of Hope.

It was during her second term of University that a plan to support marginalized youth formed in her mind: “The principal from Chief Kahkewistahaw Community School, came in to our class to talk about schooling and education and how it is important for U of R grads to go out on reserves and experience teaching there. I chatted with him later about funding, and learned that federal funding on reserves, and schools on reserves, is significantly less than funding for schools off reserves. I had thought all schools were the same! I remember going home to my parents and talking about it: ‘I want to do something; already there’s such a drastic change between conditions on and off reserves. And all the discrimination that goes on…it doesn’t seem right that in education, especially,—we say Canada has such great education and equal access to education but it doesn’t seem like it.’ So, my parents asked me what I wanted to do. I said ‘I don’t know, but I want to do something.’ Over breakfast, we talked about names, and I thought ‘Pencils of Hope’ was a good name and my dad said, ‘What do you want to do with that?’ I talked to the principal again, and I said, ‘Why don’t I try this? I’m a photographer by hobby. I’ll donate everything I make through photography to this cause. If I can get enough funds, will you accept my gift of supplies to this school?’ I tried it out my first year and it worked out really well.”

Since then the organization has “snowballed,” says Aysha. Sponsors started making small donations. A committee was formed. For the first three years, Pencils of Hope partnered with one school each year. But this year, the committee decided to partner with four schools. “Four schools was a huge difference. We received a grant from Taking it Global, which offered a rising youth grant.”

Donations and, therefore, spending has increased substantially over the four years of existence. The first year the group spent $750 on supplies and this year they spent over $4000, with carry over for next year. Pencils of Hope has made some changes to their vision as well: “This year we’ve changed our vision to match the Calls to Action. So from here on out we made a vow to partner with at least one school on a reserve.” The group is also making supplies available to individual students who may not be in a school that is in partnership with Pencils of Hope.

For Aysha, this work has been part of her journey toward reconciliation. “I know in the long run it isn’t much at all, but in my way, in my journey to reconciliation, I can do this one thing.”

Doing this project in a good way, a humble way, has been one of Aysha’s goals: “When we talk about Pencils of Hope, I don’t like to be called the founder. It is still a journey, still a process; I’m still learning, of course. Meeting with different elders and profs and being able to exchange knowledge, learn indigenous ways of knowing and culture, and how to go about this in a more humble way, it’s been very uncomfortable, but it’s been a great kind of uncomfortable…It’s not learning if it’s not uncomfortable.”

Aysha has learned many things along her journey, but one thing stands out in her mind, “It’s hard doing it alone, not fun to do it alone.” She advises others who would like to do something similar to, “Get many people involved and see what they will do.”

Now a first-year teacher at Balfour Collegiate, Aysha plans to carry on with the work of Pencils of Hope, with the support of her committee, family and community. “I anticipate it is going to be busy, but to me that is a good thing, to me that means more schools and more partnerships, and more relationships—expanding.”
By Shuana Niessen