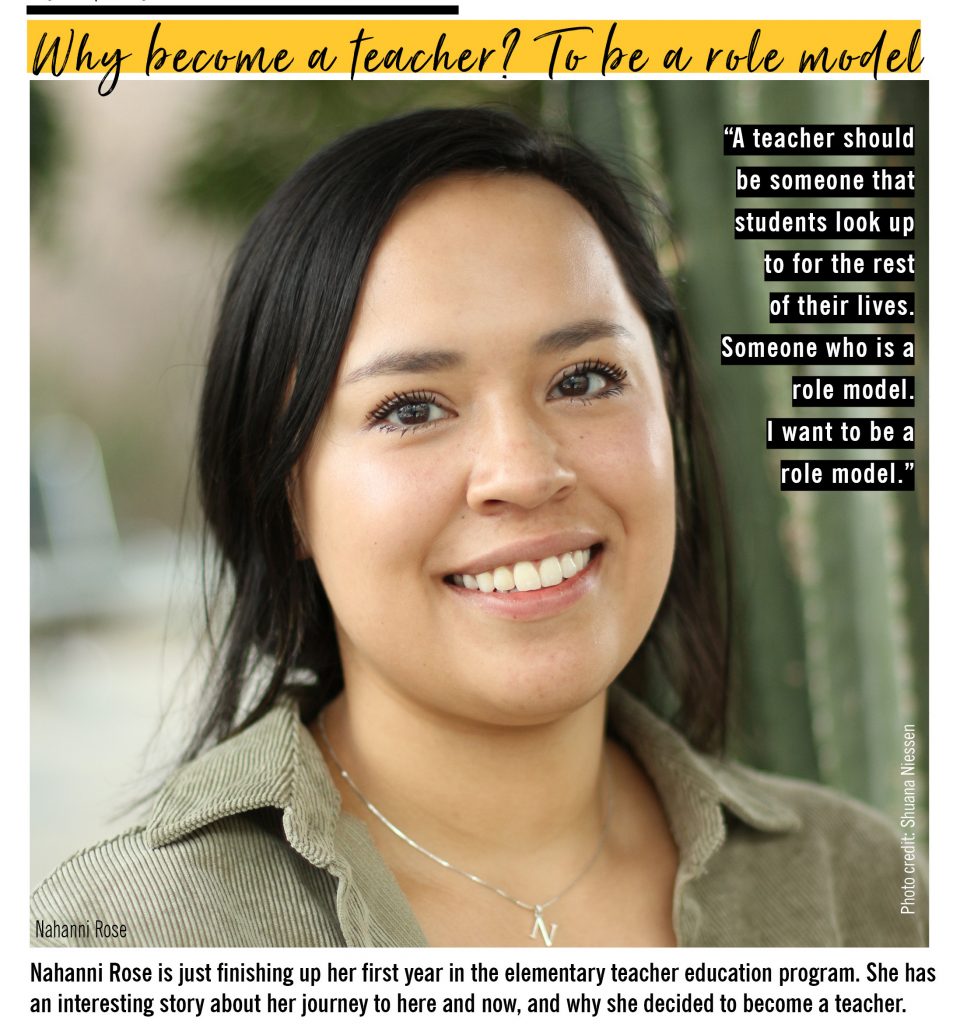 A story can be told about each of Education student Nahanni Evelyn Rose (Adams-Lindberg)’s names, which is not surprising when you consider that she was named by her mother, Carol Rose GoldenEagle, the 9th poet laureate of Saskatchewan. She was named after the Nahanni River located near Yellowknife, in Canada’s beautiful North West Territories (NWT). Yellowknife is where Nahanni spent her early years until the end of Grade 6, when her family moved to Saskatchewan. “Nahanni” is a Dene word that means “strong rock,” referring to a large rock that juts out of the Virginia Falls on the Nahanni River. Nahanni herself is a mix of Cree and Chipewyan (Dene). Her middle name, Evelyn, was given to her after the Evelyn Falls in the NWT. Given the meaning of her names and a childhood lived out in Yellowknife, it is little wonder that Nahanni loves to spend time in the outdoors and to hike.

Nahanni feels little connection with her current last name Adams-Lindberg. Adams is the name of the family who raised her mom after she was scooped in the 60s. And Lindberg is the family name of her father, who left when she was very young. “I still have a close relationship with my dad, but my name has no significance to me; that is why I want to change it to Rose, which has more meaning.”

Rose was name of the family’s first pet dog, adopted when they relocated to Saskatchewan. The significance of the name Rose, says Nahanni, “is that there are four letters in the word and there are four people in our family. Roses are beautiful but they have some thorns, like we have.”

Rose, the pet, brought their family together through the hardships they experienced after moving away from Yellowknife and through the difficult financial and emotional time while Nahanni’s mom, Carol, transitioned from being a journalist with CBC to a full-time artist/writer. Carol had been working on her first novel, Bearskin Diary, on top of her regular job and single parenting while the family lived in Yellowknife. But after a friend who had deferred his dreams until retirement passed away, Carol decided not to put off working on her art.

A year or so after settling down at Regina Beach, Carol left her job with CBC to establish herself as an artist. Nahanni says, “We ended up getting poorer at first. I know what it is like to grow up without money. But it all paid off in the end.” Nahanni points to the struggles faced by their family as showing, “what it’s like being raised by a single mom from the 60s scoop.” The difference being, “My mom ensured we grew up with a loving mom, something she never grew up with, a mom. I am living a happy life regardless of the obstacles my family has faced—we always make it out strong.” This outcome aligns with the oft-repeated family mindset of “Everything is going to work out.” And it has. Carol is now a successful published novelist, poet, playwright, visual artist, and musician and Nahanni is on her way to her chosen profession: teaching.

Growing up in Yellowknife was a great experience for Nahanni: “I loved it! I grew up with my brothers, grew up on the back rocks, playing outdoors, in the bush.” Nahanni is the twin sister of her younger brother (by 11 minutes) Danny, and the younger sister of Jackson. “It was like growing up with your best friends. They really looked out for me and made sure I was included,” says Nahanni.

Comparing her schooling experiences in Yellowknife to Saskatchewan, Nahanni says, “In Yellowknife, the students were mostly Indigenous. We didn’t see each other as colour; we saw people as their personalities. We were also taught Indigenous culture in our curriculum with activities like sewing class and a hunting class where teachers and Elders would take us out to the bush to learn how to snare rabbits and to dry meat. When we moved here, I felt like it was Danny and I, probably two out of the five Indigenous people in the school. It was hard making friends here. I’m just happy that I had Danny, he was kind of my best friend. I felt like I didn’t get bullied a lot. It took adapting to a new environment to learn who I am and I am happy in my place in life. I didn’t experience racism the way my mom did, but I felt that people did judge me by my look and not my personality.”

A couple years after moving to Regina Beach, however, their family became accepted as “locals” in the small town, and life became easier. “Now I work at the Beach Bar and I’m a local and everyone knows me,” says Nahanni.

When the time came for choosing a career, Nahanni couldn’t decide. “When I graduated high school, I didn’t know what I wanted to do at all,” she says. It wasn’t until she turned 21 that Nahanni took steps towards deciding on a career. She made a pros and cons list for a variety of career options, and education was the option that stood out for her. “It checked off all the boxes: I’m good with people, love kids, and I want to be a good role model. I want kids to grow up with someone who actually cares because I feel like I’ve had teachers in the past, where some cared and some didn’t. I could see myself as a teacher who cares. Something inside of me spoke to me: ‘Be a teacher.’ You just get those gut feelings.”

While many of her family and friends affirmed and encouraged her choice to become a teacher, Nahanni remembers specifically one of her Lumsden high school teachers, Ms. Winter, who was a great influence on her. “She was the one who paid close attention to me; she built that student-teacher relationship. She made me feel seen and heard. Ms Winter would say, ‘Your mom raised you well’ and ‘You’re a good kid.’ That made me feel seen as an individual who is capable, able to do things, even if I didn’t understand something right away.”

Nahanni considers her older brother Jackson a role model as well because he tutored her throughout high school in math: “Jackson was patient even when I was frustrated. He would calm me down and encourage me.”

Being a role model is why the teaching profession is so significant; Nahanni says, “We are the educators that need to be there for students, not just as a job, but as they develop. A teacher should be someone that students look up to for the rest of their lives. Someone who is a role model. I want to be a role model.”

Nahanni chose the University of Regina (U of R) for her elementary teacher education program for several reasons: She wanted to stay in Regina because it was close to her mom and her twin brother. Nahanni adds, “I thought it would be a great place to study. I had heard from friends and friends of friends that this education program is the best in Canada.”

Her experience at the U of R has been positive. Nahanni says, “I love it. I was first accepted into the Faculty of Arts. I didn’t get into the Faculty of Education, I think maybe because I was a bit late sending in forms. I took three classes in the Arts program that all transferred over into my education program.”

The next year Nahanni was accepted as a transfer into the Faculty of Education. “I was so happy. It was the best thing ever. I called my mom and my dad and I cried and danced. It was a lot of emotion. I was alone in my house. I am really happy. It all worked out. That mindset of when I was a kid—I stay true to that today. Everything will work out,” she says.

A major obstacle Nahanni had to overcome to go to University was her tendency toward procrastination. Nahanni says, “I kept making excuses and putting it off, telling myself I was going to apply. Mom and Jackson kept saying, ‘Just apply!’ Jackson on a daily basis asked ‘Have you applied yet?’ One day I just did it because I didn’t want him asking me anymore. The next time he asked, I could say, ‘I did it already.’”

As advice to others considering becoming a teacher, Nahanni says, “Just put in your application. Don’t make excuses and see where it goes. Who knows, it might change your life. If you’re nervous or scared, that’s the point where you push yourself a little, because you know you want to become a teacher. I was nervous, too, afraid I wasn’t good enough to be a university student. Now I don’t think that at all. I know I can do it.”