Before third-year pre-interns go into schools for their 3-week field experiences, they participate in extensive professional development. Treaty education is a significant part of their learning experience.

This fall (September 13),  three bus loads of pre-interns went to the Treaty 4 Gathering at Fort Qu’Appelle, and while there, experienced the Kairos Blanket Exercise along with Treaty 4 cultural activities.

Ten facilitators from the Office of Treaty Commissioners, 10 elders, and 10 faculty and staff worked with 270 pre-interns on September 23 and 24 at the University of Regina. Students were given opportunities to interact with Elders and received instruction on treaties and treaty education. 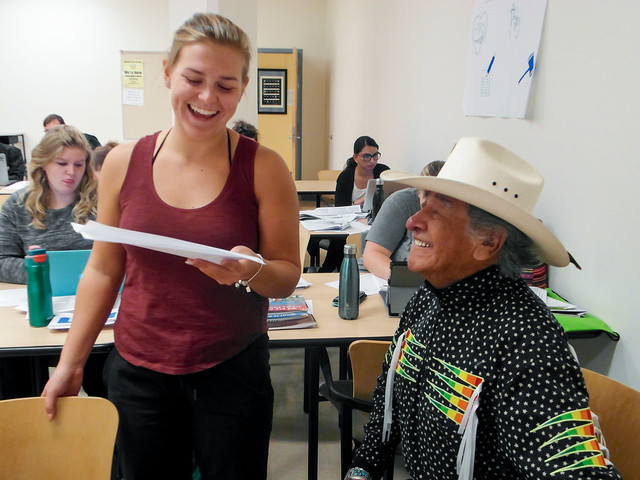 Place cursor over the photo above to scroll through photo gallery. (Photos courtesy of Instructor Julie Machnaik)

Feeling inspired after a great weekend of professional development! Thank you for the amazing opportunities @URFacofEd pic.twitter.com/VL0TWL2CGf

Today we are talking about resources that will help us in our classrooms and lesson plans! #treatyeducation #universityofregina @URFacofEd pic.twitter.com/BTKRYduztK

Had a wonderful time at Day 1 of the Treaty Ed Conference, learning about Treaty 4 and other Saskatchewan Treaties. Thank you, @URFacofEd!

A great resource to add to your professional collection! #urpreinterns https://t.co/wSTocguZpG

August student success workshops are designed for new students but open to all students https://www.uregina.ca/orientation/Student-Success-Workshops.html?fbclid=IwAR3iDQkL3jK75kaNkuNO0lua4XW4feZDiRbMRD6_2AbainSsYPtDfmQzjI8 #UREdu

Lise Milne and Nathalie Reid from @UofRegina are at the helm of creating a digital hub to help child welfare organizations keep up with #COVID19 research. #SHRFfunded #ResearchThatMatters to #SKhealth @UR_CTRC http://ow.ly/AOYI50AQxYX