The Faculty of Education joined with the Treaty 4 Gathering at Fort Qu’Appelle on Monday, September 12.

Nearly 70 participants sat in the circle of the large tipi of the Treaty 4 Governance Center to discuss an important and emotional issue: “Empowering Women”: Weaving Stories, Inspiring Action–A Conversation about Missing and Murdered Indigenous Women and Girls.”

After Elder Alma Poitras led the meeting in prayer and smudging, Elder Brenda Dubois spoke of the importance of Kokum (a Cree word for Grandmother) in protecting communities and ensuring safety. However, she pointed out that many Kokums are now raising several children who have been left behind by their parents. The need is greater than can be addressed by Kokums only.

Elder Dubois emphasized the need to “re-dress” not just address the issue of missing and murdered Indigenous women; the discussion has gone on long enough–solutions are needed and reparations must be made. She pointed out that colonists negotiated with the men only, in a time when women were the decision makers. The effects of colonization have been devastating to Indigenous women. Dubois said that Indigenous women must take back their rightful position, as must the men.

After she spoke, several women shared their stories of loss and trauma due to racial and gender discrimination. One woman spoke of the need for stories of healing, so that we can walk forward together.

Dr. Brenda Anderson then spoke on the need for professors such as herself to use their privilege to educate others to respect and honour Indigenous peoples and cultures. She expressed concern, however, about how “good” works would be done. She reminded us that many White settlers believed (and would still believe) that the residential school system was good. 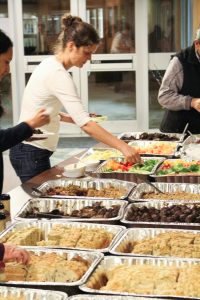 After refreshments prepared by Dickie Yuzicapi, the Sioux Chef, participants were given ribbons and instructions for creating a star, as part of the One Million Stars project by Maryann Talia Pau an Australia-based, Samoan Super Weaver. She says, the hand woven stars “are symbols of light, courage and solidarity to end all forms of violence, including violence against women, bullying and racism.”

Dr. Shauneen Pete took up the challenge to move the discussion to action. She generated discussion in a brainstorming session about two key questions: What are the concrete issues that the National Inquiry into Missing and Murdered Indigenous Women and Girls must address for it to be successful?; and, Given your personal/professional position, what are the concrete actions that you can take to make our communities safer for Indigenous Women and Girls? Many suggestions were offered including ensuring the RCMP are accountable, teaching about safety, ensuring there is no ban on cold cases, ensuring support through the justice system process, and most importantly, when attempting to redress the issue, paying attention—listening—to the families and communities who have been affected by the loss of a beloved woman or girl. This was a major theme throughout the discussion. The answers should come from Indigenous communities, from those most impacted.

Organizer and moderator, Dr. Michael Cappello said that what he took home was the importance of centering the voices of families affected by the trauma of missing and murdered loved ones. Dr. Cappello felt that it wasn’t an option for educators and preservice teacher educators to remain outside of this important issue. He said, “We, as White Settlers, are positioned to bear some of the weight of this issue. We, as a Faculty, can create spaces—through policy, values, language, and intention—for Indigenous ways and culture to be respected and honoured. We can prepare young men to go against the violence of the dominant male stereotype; we can honour women and girls, showing them how they should expect to be treated; we can teach to engage the heart in preparing teachers.”

Congratulations to Kelsey Mooney, who successfully defended her master's thesis, "A Community Based and Mixed-Methods Approach to Exploring the Dove Confident Me Five Session Body Image Intervention In a Holistic School Classroom” on July 19, 2022. #UREdu