On March 4, 2017, the Faculty of Education’s UR STARS, along with UR Pride Centre and Camp fYrefly, hosted the first Gender and Sexual Diversity Ed Camp (#GSDcamp on Twitter) at the University of Regina. The PD event (using the edcamp model of PD by teachers for teachers) started off with keynote Jack Saddleback. “Jack is a Cree two-spirit transgender gay man from the Samson Cree Nation in Maskwacis, Alberta.” (Source link)

In his presentation, “There are no Closets in Tipis,” Jack spoke about the importance of family and community support of diversity for the wellness of diverse individuals. As a genderqueer child, Jack, who was born female, increasingly felt the pressure to fit into the feminine spectrum, but felt at odds with this social expectation. At puberty, when Jack finally decided to embrace the feminine, he began to suffer from severe depression and isolation and eventually tried to take his own life. But something inside him called out “No,” so he went looking for help.

When Jack finally decided to tell his grandparents that he was a man, he felt terrified. He feared they would no longer love him. But he needed them to know who he was. Their response was “We don’t know anyone else like you in our family. But we want to help you in any way we can.” They suggested Jack meet with a medicine man who was coming to their community. Jack agreed to this. The medicine man diagnosed him as having two spirits. Jack said, “I’m not just gay, Cree or  trans. It’s the inseparability of all those things that I was experiencing.” After the medicine man tried to exercise him, Jack felt hurt. He knew he needed to tell his story so that this type of thing wouldn’t happen again. (See documentary sexspiritstrength.ca)

Jack said, “If it wasn’t for my family and community support, I wouldn’t be here. Ask yourselves how can I be a good ancestor to those little ones.”

Jack’s keynote was followed by two sessions (with six concurrent presentations in each) from Camp fYrefly, UR Pride, TransUmbrella, PFLAG Canada, GSA, and a Two-Spirit Panel discussion.

Photos below: (Slide cursor over the photo to see the arrow, click on the arrow to go to the next photo) 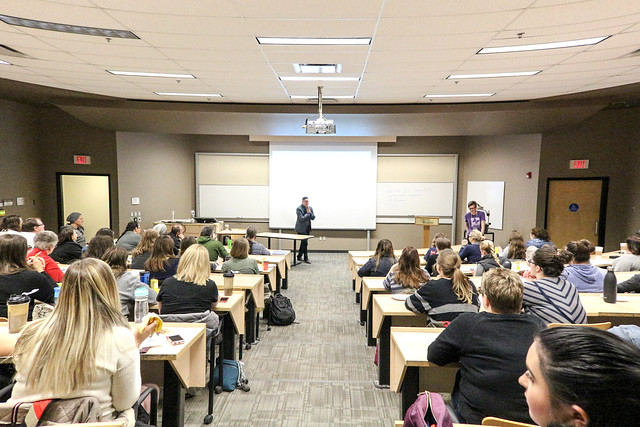